The Horses of the French Republican Guard and the answer to the riddle! 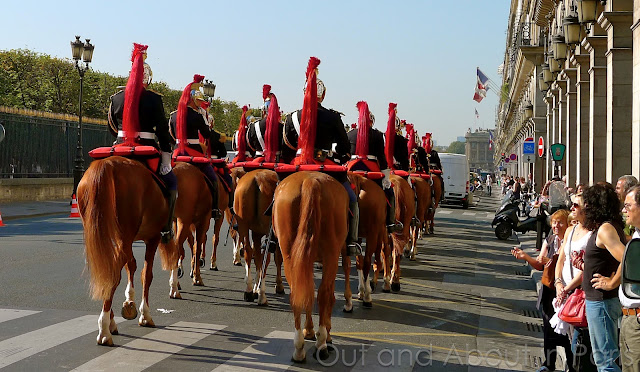 This rather unflattering shot is to remind you of the riddle that I asked last Saturday concerning the purpose of a metal template used while grooming horses during Napoleonic times. If you click on the photo to enlarge it, you'll see the checkerboard pattern on the horses' haunches that created an optical illusion to mislead enemy scouts. Evidently, horses that are tired, sick or old have sunken croups, the indented area between the two haunches, so this dappled effect made it difficult for opposing forces to determine the condition of Napoleon's cavalry when viewed from afar.

When I stumbled across this procession last September, I didn't have a clue as to who or what they were. I just snapped some pictures because it's not every day that you see horses walking down the rue de Rivoli. Now, I'm rather pleased to say that I know that this was the first squadron of the French Republican Guard because all of the horses are light brown with light brown manes and tails. If all of the horses were dark brown with black manes and tails, it would have been the second squadron, whereas the horses of the third squadron are almost completely black. The only variations are the drummers, who ride grey horses chosen for their strength, and officers, who may select the color of their horses. You can test yourself by looking at the following photo. How many horses are from the second squadron? 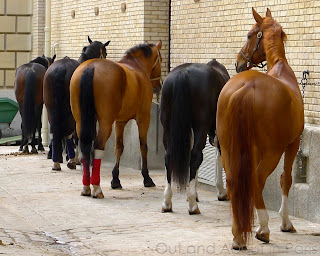 Something else that you'll notice by looking at the procession in the first photo is that all of the horses are approximately the same size. That's one of the three criteria that the Republican Guard use to select horses from farms in Normandy. The other two are color and age. 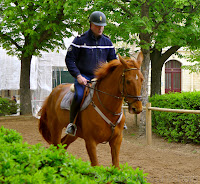 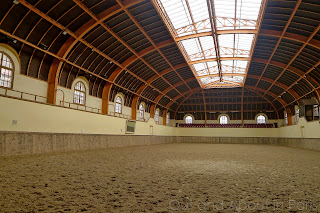 The 200 horses assigned to Les Célestins barracks are exercised every day, either outdoors or in the largest indoor arena in Paris. Built at approximately the same time as the Eiffel Tower, the ironwork is impressive. Evidently, it's possible to watch twelve members of the Republican Guard demonstrate the principles of French riding at a performance given on one Thursday every month. I'm currently trying to find more information about how to get tickets. 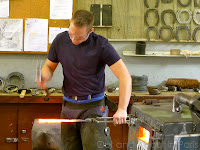 Even though there were more than 100,000 horses in Paris prior to World War I, hearing the clippity-clop of hooves on the Champs-Élysées is more unusual now that there are only 400 horses left in the city. Just like me, horses go through a lot of shoes and need to have new ones every forty days. Unlike me, the Republican Guard horses have designers, also known as blacksmiths, who create shoes especially for them!

To illustrate how well the horses are trained, just as our guide was explaining that the stalls in the large stable were previously reserved for officers' horses but are now used for sick horses or those who are a bit naughty, I caught sight of this horse giving us a lively demonstration. I love his expression - he seems to be saying, "No, I don't know how this tail got in my mouth...but I'm certainly not the naughty horse to whom he is referring!".


Edit: It turns out that designs on horses' haunches aren't unique to France. Using the same sort of template and back brushing, the Royal Canadian Mounted Police decorate their horses with maple leaves. I wonder if American horses put maple leaves on their haunches while traveling around Europe like the American backpackers who don't want to be recognized as being from the United States? Many thanks to Christine for sending the following photo that she found online!