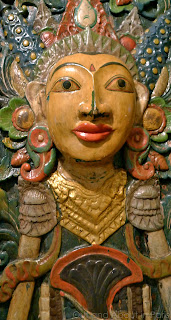 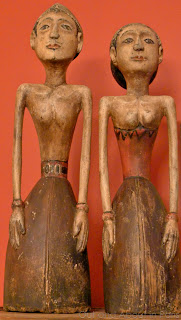 I'm an expat, but we all aren't created equal. Some are long-term expats who are frequently married to locals, others are one-time expats who are transferred abroad for a single assignment and then there are the ones who have lived in different countries and for whom Paris is just another posting.

While we're all lumped in the same category by outsiders, within our ranks there is some dissent. Long-term expats generally feel superior to the other two groups because they're integrated into the local society, single-term expats believe they've got the best of both worlds because they can experience life in France for a couple of years before returning to their "real" lives and professional expats are pleased to be in Paris but don't necessarily believe that it's the best city in the world because they were happiest in Kuala Lumpur, Buenos Aires or wherever...

Category 3 expats can usually be identified by their reluctance to buy curtains and hang pictures in their new home because there's a widespread superstition belief that we'll be transferred as soon as we're settled. As evidence of this, I was unpacking the last box in a longed for apartment overlooking the lake in Montreux when Stephane returned from work and demanded, "What are you doing?". Baffled as to why he was so brusque, I replied, "Unpacking. Why?". No answer. It was only later that evening that he revealed that we were being transferred to Paris. Saying that I wasn't pleased is putting it mildly.

That's why I'm happy to say that I threw caution to the wind on Wednesday and bought a couple of pictures for our apartment that will serve as good reminders of our time in Paris. Let's hope I'm not tempting fate! 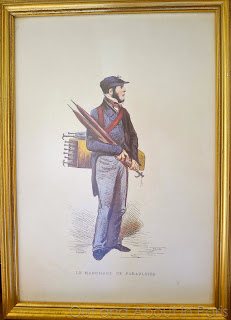 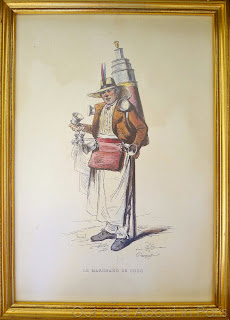 As soon as I spied the print of an umbrella salesman in the Apprentis d'Auteuil vintage store, I knew that I had to get it for Stephane because he's so proud of his made-to-order umbrella from Parasolerie Hertault. And then I found a little something for me - a picture of a hot chocolate salesman to remind me of the days that I dedicated to hot chocolate research. Isn't it a shame that these vendors have disappeared from the streets of Paris?

Feeling pleased with my purchases, I headed to the post office and filled out form after form to send our tax returns to the USA via registered mail. When I presented the five envelopes at the counter, the postal employee kept sighing about having to complete the official portion of the forms while the woman behind me sighed because it was taking so long. Caught in between the two, I bit my tongue to prevent myself from informing them that the French postal system is one of the most complicated that I've ever experienced and that it's not my fault that there are so many forms in their country. I'm just an expat after all! 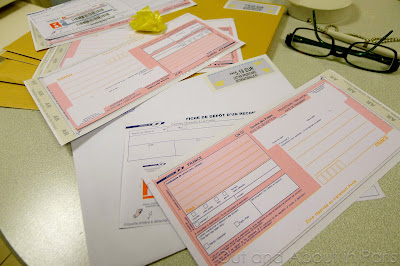