Expat Blog Hop - Leave a comment and win a glass of champagne! 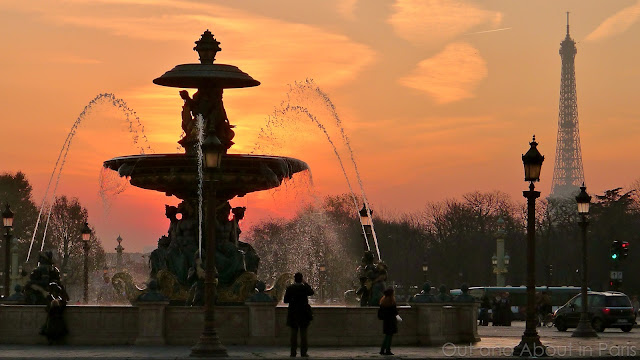 Welcome to "Out and About in Paris"!

In honor of today's Expat Blog Hop, I would like to share the recipe for Expat in Paris, a complex yet delightful dish. Our test kitchen is still fiddling with the key ingredients and measurements, so please let me know if you have any suggestions to ameliorate the recipe.

1 heaping cup adaptability and willingness to reinvent oneself.
3/4 cup readiness to learn French, especially excusez-moi and pardon, which you'll use whenever someone bumps into you. Don't necessarily expect "real" Parisians to employ these phrases.
1/3 cup understanding that you're considered a representative of your country and may be questioned mercilessly as to its policies, particularly while riding the bus so that all of the other passengers can eavesdrop on your response to whether you agree with the death penalty or not.
1 tablespoon realization that you'll need an entirely new wardrobe if you consistently eat buttery croissants for breakfast and baguettes for lunch and dinner.
1/8 teaspoon logic. While this may seem like a small quantity of an otherwise crucial ingredient, remember that what's logical to an Expat in Paris isn't always logical to the locals.
1/32 teaspoon ability to use grams and milliliters rather than cups and spoons to create a recipe. It will probably never happen!

Bake in a Parisian apartment for 3-5 years. Don't be surprised if you have some difficulty extracting Expat in Paris from its home at the end of this period because the dish frequently sticks to its environment and refuses to let go.

Expat in Paris is best when served with champagne or a glass of wine, preferably at a cafe with a view of the Eiffel Tower.

Please leave a brief comment if you would like to enter your name in the "Out and About in Paris" giveaway. Comments sent via email are not eligible. The winner will have the choice of one of the following three prizes:

The deadline to enter the drawing is 3:00 pm (CET), April 24, 2012. The winner will be announced later that day. Update: Congratulations to Deckage, the winner of the giveaway.

[Edit] With hindsight, I realize that I forgot to thank Steph at Blog in France for organizing the hop. In between welcoming lambs into the world, writing books and growing much of their own food on their farm, I don't know how she found the time. Merci, Steph!

Thanks for reading! Please click on any of the following to hop to another expat blog and participate in their giveaways.