Here, there and everywhere - the coat of arms of Paris 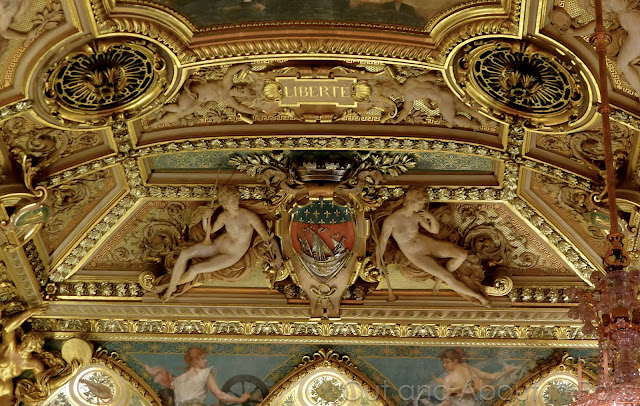 It decorates the ceiling of the grand reception room in the Hôtel de Ville... 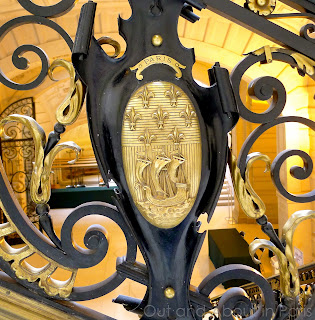 adorns the Escalier d'Honneur, the main staircase, at the Sorbonne... 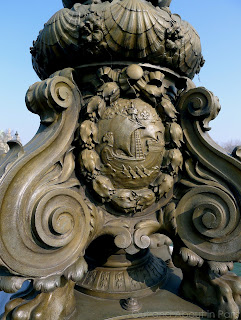 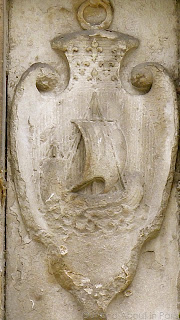 enhances Pont Alexandre III and is still visible on the only Renaissance fountain in Paris, the Fountain des Innocents, which was inaugurated on June 16, 1549.
The coat of arms of Paris is here, there and everywhere, but what does it mean? The sailing vessel, an odd symbol for a landlocked city, is thought to represent the ancient Ile de la Cité, which sits like a boat in the middle of the Seine River. The city's motto, Fluctuat nec mergitur ("She is tossed by the waves, but is not sunk") is frequently seen beneath the coat of arms.

On some crests, like the one below, you'll see a portrayal of the ancient city walls at the top to remind us that civilization needs protection, while the wreath of Celtic oak and laurel represents victory. Some modern designs do not include fleurs-de-lis because lily flowers were a symbol of the French monarchy.

Even though I see the coat of arms on a regular basis, Chickster's post about the Breton flag made me realize that I have yet to spot the flags for the Île-de-France and Paris. Please let me know if you see one of them before I do!