Yesterday was a very important day - not only will it go down in history as the day that Gwan kindly took me on the "Super Best Tour Ever of Tours", but it was also the day after the presidential elections in France. Riding the metro to Gare Montparnasse in the morning, I  studied the faces of my fellow passengers, most of whom were reading newspaper articles about President-elect François Hollande, to determine how they felt about the results. If they looked pleased, I wondered if lived in the 20th arrondissement, where 71.83% of the residents voted for Hollande. If they appeared worried, I speculated that perhaps they were my neighbors in the 16th arrondissement, where Nicholas Sarkozy received 78.01% of the vote. Never had I felt myself to be more of an outsider in Paris.

So, I did what any self-respecting American expat would do - I bought a Herald Tribune (to hell with French newspapers) and a big cup of American coffee from Starbucks (forget about tiny little espressos) and settled into my seat on the TGV. No doubt about it, I was in an expat funk. Fortunately, I had such a good time chatting with Gwan that I completely forgot about French politics. Or at least I put them out of my mind until I received a message from my daughter asking if I had read the Op-Ed in the New York Times written by Rosecrans Baldwin, the author of Paris, I Love You but You're Bringing Me Down. When Sara added that she found it strange that I hadn't blogged about the elections, I responded like a rebellious teenager, "It's not my country - I only live here. The French can do whatever they want!".

In case you're not an expat and can't figure out why I was acting like such a petulant child, let me explain. Past experiences in other countries have shown me that no matter how much I feel like an insider, I'm not. I'm an American living in a foreign land. That's why my Filipino neighbors advised me to send our cook to the market rather than going myself when there was a coup in the Philippines and why I had to tell our children to crouch down on the floor of our car when we drove through streets filled with angry villagers armed with stones and machetes during a period of political unrest in Indonesia. Countries are like big families. They don't want to hear a foreigner's opinions when they're trying to decide if they want to spend the next 5 years with Uncle Nick or Uncle Frank. I'm just thankful that the French declined Aunt Marine Le Pen's invitation because she scares the living daylights out of me!

To President-elect Francois Hollande, I wish you success. After all, Stéphane and I hope to live (and pay taxes) in Paris for four more years. It's our home, even if we are outsiders. 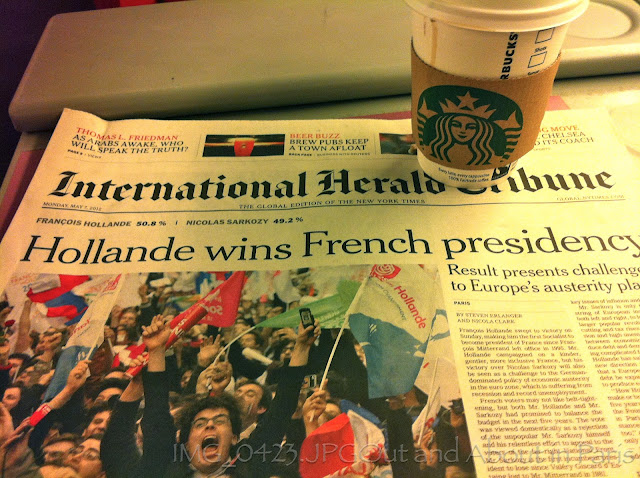