Château de Chenonceau - the most visited castle in the Loire Valley 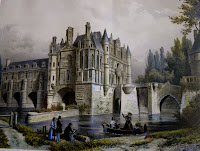 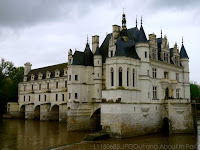 Click on the photos of Chateau of Chenonceau to enlarge. Looks like dark clouds aren't that uncommon!

After Bridget sent me the link for a blogpost about Archibox, architectural puzzles of the Château de Chambord and other famous European monuments, I was reminded of the castle cakes that I used to make for my daughter's birthday. It brought back good memories of both her childhood and mine, when I daydreamed of living in a fairytale world inhabited by queens, kings and talking horses.

Perhaps the most magical castle in the Loire Valley is the Château de Chenonceau, also known as The Ladies' Château because of the six women who played such prominent roles in its history. After King Henri II gave Chenonceau to his mistress Diane de Poitiers in 1547, she embellished it by building the bridge that straddles the River Cher. Fast forward to World War II when a German artillery unit kept a close watch on the castle because the entrance was in the area controlled by the Germans and the door on the left bank was in the unoccupied zone. The River Cher was the line of demarkation. 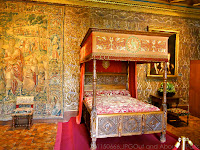 Catherine de' Medici's bedroom and the view of the river from her study.

While there are plenty of impressive rooms, I particularly enjoyed seeing the small study where Catherine de' Medici ruled France after the death of Henri II. If you're trying to connect the dots and wondering what happened to Henri's beloved mistress, Catherine de' Medici made Diane de Poitier relinquish Chenonceau in exchange for another castle, Chaumont-sur-Loire.

Best of all were the flower arrangements in every room. Changed twice a week, most of the flowers are grown on the estate. To honor the tradition started by King Charles IX of giving sprigs of Lily of the Valley to women on May 1, these aromatic flowers enhanced all of the arrangements. Chenonceau is definitely the best smelling castle that I've ever visited!

As Château de Chenonceau is the most visited and most photographed castle in the Loire Valley, the downside are the hordes of people who stampede through the rooms as quickly as possible so that they can scratch it off their list before traveling to the next castle.

Louise of Lorraine's bedroom was particularly crowded as everyone wanted to study the black ceiling decorated with objects of mourning, such as feathers (from the old French word penne meaning sorrow), silver tears, grave-diggers' shovels, widows' cordons, crowns of thorns and the Greek letter lamba, the initial of Louise, intertwined with the letter H for her husband. After Henri III was assassinated in 1589, Louise retired to Chenonceau to meditate and pray.

Be sure to get the audioguide for additional information about the rooms and leave plenty of time to visit the gardens.

To see photos of Chenonceau on a sunny day, please visit Gwan's blog.