Out and About in Boston: Things that made me angry, caught my eye and made me smile

Candles, empty wine and liqueur bottles, dirty dishes covered with crusty food and soiled blankets (and by soiled, I mean soiled!) greeted us when we keyed in the code and walked through the door of our rental apartment in Boston yesterday. Wondering if we had stumbled upon the aftermath of a ceremonial sacrifice, Stephane and I reeled at the sight. After all, we had just spent the last week preparing our house in Annapolis for guests and seeing the condition of the apartment in Beacon Hill was a sobering reminder that not everyone follows my mother's dictum to leave a place in better shape than you found it. After an irate call to the agency, it took the cleaning crew three and a half hours to clear away the debris from our raucous predecessors so that we could finally start our vacation.

The good news is that the apartment is in a prime location right in Beacon Hill. Here's what caught my eye during a morning stroll around the neighborhood. 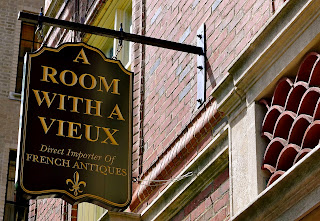 A clever sign for an antique store. "A Room with a Vieux" (pronounced "view", which means "old" in French"). 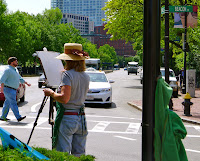 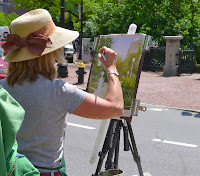 An artist hard at work on the corner of Beacon and Charles. She made a lot of progress in between the time that I took the first photo at 10:04 am and the second at 12:15 pm. 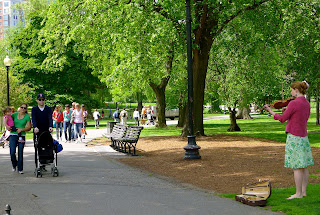 Wouldn't it be great to work in the Boston Commons on a "barefoot in the grass" kind of day? For some reason, I find it rather difficult to imagine Parisian street musicians taking off their shoes! 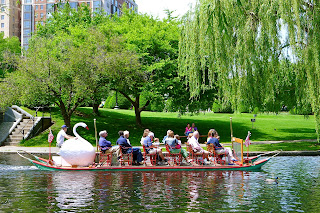 If you click on the photo to enlarge it, you'll see a mallard racing against one of the man-powered Swan Boats. It reminded me of the children's story, Make Way for Ducklings, that is set in the park. 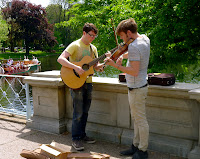 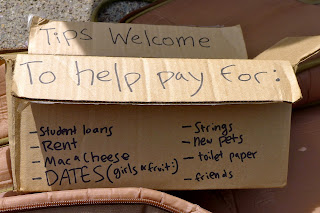 Talented musicians with a sense of humor. Their box reads, "To help pay for: student loans, rent, Mac and Cheese, DATES (girls and fruit!), strings, new pets, toilet paper, friends". When I deposited some money in their box and told them that it was the part about the toilet paper that really spoke to my heart, they laughed and said that they had been making good use of the leaves in the park. 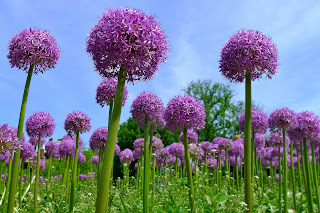 Flowers. I don't know what kind. 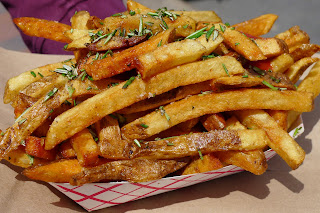 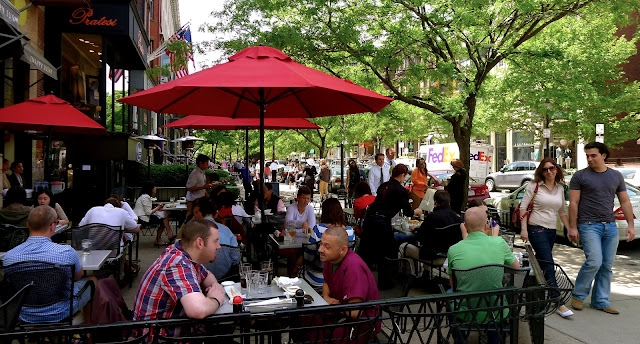 Lunchtime crowd at one of the many restaurants along Newbury Street.

I LOVE Boston. It's my kind of city!
Labels: Boston out of Paris vacation