Clink - locked up at the Liberty Hotel in Boston


Gazing through the iron bars, I couldn't help but wonder what I had done to end up in the Charles Street Jail. Did the Boston Police Department misinterpret my post about stalking Julia Child? Or, perhaps my crime was related to Shear Madness, the whodunit murder mystery? Whatever the reason, I found myself wearing a black and white striped uniform in a place known affectionately as "Clink" by the other inmates. 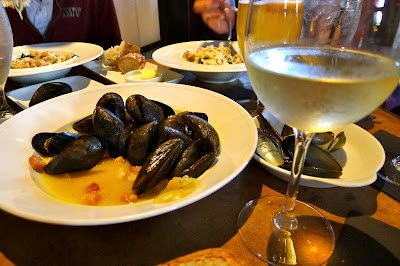 Apparently unconcerned by our incarceration, Philippe and Stephane suggested that we share some savory mussels and Faro pasta while we waited for Mike, Peter, Sara and Jon to join us in our cozy nook in the octagonal rotunda.

Even though the prisoners used to be segregated by sex and category of offense when the Charles Street Jail was built in 1851, the warden allowed the convicts to mix freely prior to the Fashionably Late Show last night. Released from the confines of his cell, one of the younger inmates started dancing to the booming music while our group discussed complicated capers involving dog sledding in Lapland, public health, Shazam and Tuscany.

Just as we were starting to acclimate to life in the slammer, the guards released us early for good behavior. Hopefully, we'll find ourselves incarcerated in Clink again. With a range of social events, like Yappier Hour for dogs and their friends, live music, weekly fashion shows and Spring Stretch Saturdays, the Liberty Hotel is a vibrant Beacon Hill destination.