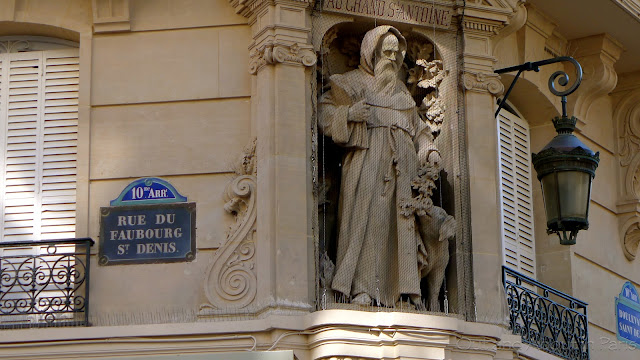 Africa, India, China - it was as if I traveled to the far corners of the earth without leaving the 10th arrondissement this morning. In spite of the tantalizing smells of kebabs, curry and roasting chicken wafting through the air, Françoise Meunier immediately captured our attention by asking if anyone knew the difference between "rue", "faubourg" and "boulevard". As we hemmed and hawed, the guide of the WICE Market Walk explained: 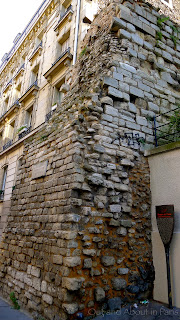 Rue - Designates streets that were within the ancient walls of Paris. The remnants of the old walls, like this one in the 5th arrondissement, are tangible reminders of how much the city has grown since Philippe Auguste fortified Paris at the end of the twelfth century.

Faubourg - Literally "false village", it indicates an area that was outside the original city limits.

Boulevard - Some of the broad boulevards for which Paris is famous date back to the late seventeenth century when they were constructed during the reign of Louis XIV. From 1850-70, Baron Hausmann continued to build a network of wide avenues according to the modernization plan of Paris commissioned by Napoleon III.

After explaining that street numbers in Paris start at Notre Dame, also known as kilometre zero, Françoise explained the meaning of bis when it follows the number in an address.

Bis - If someone tells you to meet them at 40 bis rue de Rivoli, it means that the original building (40 rue de Rivoli) was divided into two smaller buildings and that the additional building required another number. Rather than use the designation 40 1/2, bis is used to mean "encore" or "repeat".

I'll share the addresses of the restaurants and stores that we visited in a future post, but in the meantime, here are a couple of photos of some of the food that we saw during the Market Walk on rue du Faubourg St Denis.

Click here to read about the Market Walk near Les Halles.