Riddle for the day - what was the purpose of this building? 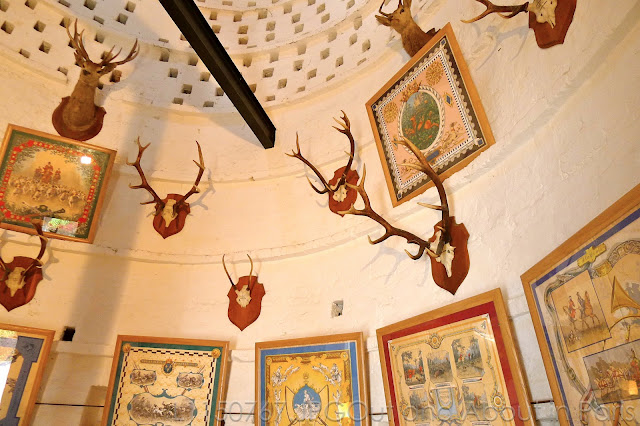 Riddle for the day - what was the original purpose of this building? A sign of wealth and power, the edifice at Château de Montpoupon is currently used to display Hermes scarves and hunting trophies. 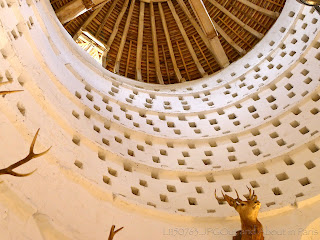 While at Château de Clos Lucé, the castle where Leonardo de Vinci spent the last years of his life, the interior is decorated with lights.

Scroll down to see the answer.

Answer: You're a clever group! I should have known that you would easily recognize a dovecote (pigeonnier). But perhaps you didn't know that the number of niches (boulins) represents the amount of land owned by the proprietor. In the Loire Valley, one niche corresponded to one and a half acres (three quarters of an hectare). Knowing that the dovecote at Château de Montpoupon had 700 niches, we can easily determine the size of the estate. As two pigeons were housed in each niche, it's easy to imagine the noise coming from the 1,000 niche dovecote at Château de Clos Lucé. Combined with the chickens on the ground, there was a real cacophony of cluck, clucks and coo, cooos.

The royal chefs of the itinerant court, whose job it was to serve between 3,000 and 5,000 meals at every sitting, used pigeons' eggs served in omelettes and fresh pigeon meat to provide a welcome change from salted meat. Pigeons also provided their owners with a rich source of fertilizer (colombine) to improve the soil of vineyards. Pairs of pigeons were given by monarchs and nobles as gifts, while their feathers were used to make quilts and feather beds. And in an age when cell phones didn't exist, pigeons carried important messages from château to château.  Thus, dovecotes played a very important economic and social role in the Middle Ages.