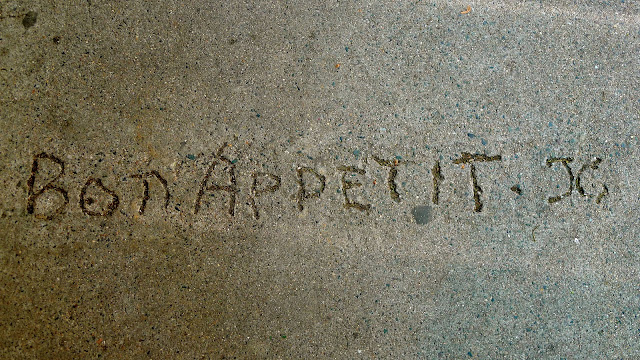 If Julia Child, the chef who changed the way that Americans think about French cooking, was still alive, she would probably wonder why I keep turning up at all of her favorite haunts. After marveling at the gleaming copper pots and pans at E. Dehillerin, her preferred kitchen-equipment store in Paris, I decided that it was time to pay a visit to Savenor's Market, which is where Julia shopped for hard to find ingredients when she returned to the United States from France in 1961.


As soon as I spied the message, Bon Appetit, scribbled in the cement sidewalk on Kirkland Street, I suspected that I was hot on the beloved chef's trail. Pushing open the glass door, a large black and white photograph of Julia confirmed that I was definitely in the right place. Whether you're searching for homemade duck confit, foie gras, meat, cheese or a whiff of the culinary icon's ghost, the original Savenor's Market in Cambridge is a tantalizing destination. The butchers are friendly and the sandwich that I sampled was delicious. Made with crisped duck confit, pickled root vegetables and spicy aoili, I'm sure that Julia would have approved of "The Toulouse".


Following Julia's imaginary footsteps down the street, I found myself in front of 103 Irving, which is where the inspirational chef lived and worked for 40 years. Even though her home was extensively remodeled after she donated her kitchen to the National Museum of American History in Washington DC in 2001, I still wanted to see the place that Julia referred to as "my little house in Cambridge". With over 6,000 square feet of living space on three floors, five bedrooms, four full baths, two half baths and four fireplaces, Zillow reports that it sold for $3,700,000 in 2009.

Living in an area known locally as "professor's row" because of its close proximity to Harvard University, Julia was a born teacher who famously said, "If you're afraid of butter use cream" and "The only time to eat diet food is while you're waiting for the steak to cook.”

Julia, don't be surprised if you see me visting your kitchen in the Smithsonian or taking a cooking class at your house, La Pitchoune, in the South of France. They're next on my list!