Look again. Are you sure that you're not missing something? Did they take any money? Sometimes they open your wallet and zip it closed so that you don't notice that anything is wrong. What about your phone? Do you still have it? Your camera?

Chatting about the "Belles Heures of Jean de France, duc de Berry", an exhibition that we had just seen at the Louvre, Gwan and I were surprised when a man stopped us shortly after we had gotten off the bus this afternoon. Simultaneously flipping open his wallet to show us a police badge while demanding if we spoke French, he fired questions at us with a great deal of urgency. According to him, he was part of an undercover operation on the bus that had noticed two (insert racial profiling) men "all over you". As if on cue, his phone started to ring. He responded tersely, "No, they aren't missing anything, but they're still checking." After explaining that it was his partner asking if he could arrest the suspects, the police officer told me to make a note of his number and call immediately if we discovered that anything was missing.

Oddly enough, even though Gwan and I had spotted a group of suspicious looking girls get on the bus while we were on our way to the Louvre, we didn't pay any attention to the alleged suspects or undercover policemen on the nearly empty bus on the way home. Was the man who stopped us really a policeman? I'm not totally convinced, but I think that he was because he maintained a respectful distance while we searched our purses. He also had an old cell phone and I think that a pickpocket would have had the latest model, probably a new one stolen from an unsuspecting victim. Gwan's fairly sure that he was a policeman because he looked like a knight in shining armor.  Handsome French policeman or elaborate hoax? There's never a dull day in Paris. 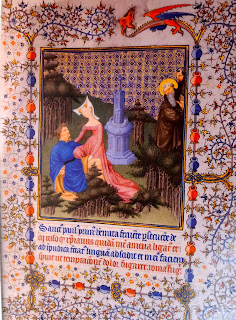 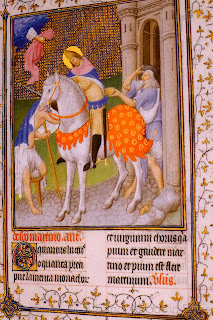 These photos taken of a book about the exhibition don't compare with the richly colored originals.


Thanks to Gwan, I had the unique opportunity to see one of the most celebrated and lavishly illustrated manuscripts from the late Middle Ages, the Belles Heures of Jean de France, duc de Berry, currently on exhibition at the Louvre. Because the prayer book was recently unbound for photography and conservation, it's possible to see the illuminated pages as individual leaves. On June 25, the 47 illuminations will return to The Cloisters collection, the medieval branch of The Metropolitan Museum of Art in New York, for rebinding.

As I left the exhibition with a few unanswered questions, I was pleased to find this informative video on YouTube.

Note to Gwan: The curator in the Medieval Art Department of The Cloisters said that the young man in the above photo is sitting on his hands to resist the temptation of the devil disguised as a woman. Evidently if you use a magnifying glass, it's possible to see that the man has bitten off the tip of his tongue and is spitting it at the devil. Thanks for a fascinating afternoon!