Imagine, if you will, that you're watching an infomercial on television. I'm wrapped in a fluffy towel and covered with a slimy substance. As the camera zooms in for a close up, I whisper in a sultry voice, "Green Goop. It's what I use to keep my skin baby soft!" Admittedly, there are a few rough edges that need to be worked out, but I think we've got a winner on our hands.

Even though green goop, also known as Savon Noir Beldi, has been around for 3,000 years, I only recently encountered it when I took a quick peek in the Moroccan bath house (hammam) at the Paris Mosque with Denise in January. Reputed to be an excellent moisturizing and exfoliating cleanser that's rich in Vitamin E, I was anxious to try it and was pleased when I spied some in an Indian store in Passage Brady on Wednesday. In spite of being teased by some of the other women on the Market Walk that I would end up looking like the Grinch, a bright green character, I threw caution to the wind and used it during a special spa treatment at home this morning. I'm happy to report that it works. My skin is so soft and silky that I even tried to take a photo of my forearm as evidence. It was one of my more bizarre moments as a blogger! 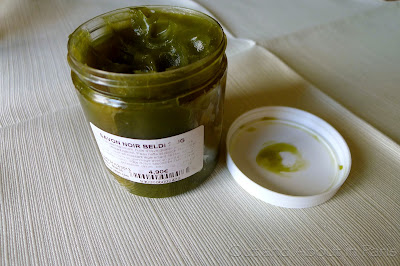 Instructions: Apply Savon Noir to damp skin. Rub lightly in circular motions and rinse after 10 minutes. Savon Noir foams into a gentle lather and softens, exfoliates and cleanses all at once. The price of one jar is 4.90 euros. 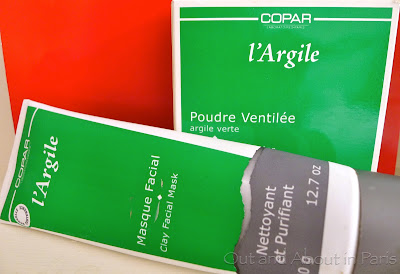 While we're on the subject of traditional beauty treatments, I may as well mention that many French and Swiss people swear by l'Argile, a green clay that is used externally as a facial mask and internally as a cleanser. Rich in minerals, it has been used for thousands of years to purify and regenerate. Plus, it's always fun to see Stephane's startled reaction when I come out of the bathroom with it on my face.

On the recommendation of a Canadian woman, I bought a bottle of Argan oil when we were in MGC, one of the many stores selling professional hair care products at reduced prices on Passage de l'Industrie in the 10th arrondissement. Having read lots of intriguing reports about this miraculous Morrocan oil, I'll let you know if it lives up to its reputation of having age defying and restorative effects.