We should have started with dessert! Vatel International Hospitality School 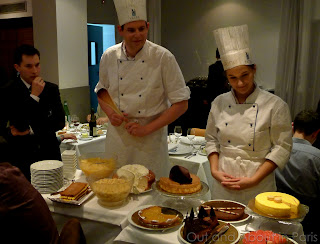 Imagine being told that you can sample as many desserts as you would like after you've already eaten three courses of delicious food. Do you:

a) Say "thank you", but I've had more than enough.
b) Ask for a small serving of fresh fruit.
c) Remember that you're celebrating the upcoming one year anniversary of your blog and throw caution to the wind.
d) Wish that doggie bags were a common practice in France.

While I managed to show a bit of restraint, Stéphane requested four items and charmed the young pastry chefs at the Vatel International Hospitality School by telling them that we should have started with dessert!

With hindsight, Stéphane had a better strategy than I did on Tuesday evening because he opted for the Menu Vatel for 35 euros, while I went with the more expensive Menu Grand Vatel at 47 Euros. As dessert is clearly the main event, I'll know better next time. 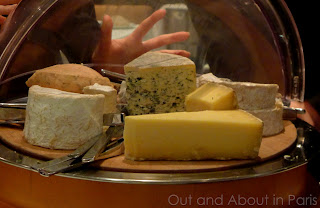 In between courses, Stéphane and I enjoyed talking with the students from Italy, Mauritius and France about their reasons for attending Vatel. Naturally, he couldn't resist asking why they chose a French hospitality school over a Swiss one, while I wanted to know if they're required to learn English. All of the students agreed that at one third the price of Swiss hotel schools, Vatel was the better option for them. In response to my question about language training, they explained that all second year students are required to do an internship in an English speaking country.

Highly attentive, the students were quick to notice as soon as a glass needed to be refilled or a plate removed, even if one of them had difficulty remembering the name of the next course and another wrestled with the wine bottle while trying to open it. Knowing that the servers are learning the trade is part of the charm of dining at Vatel. Fortunately, they didn't make the mistake of trying to remove our dessert plates until after we had finished every last crumb!

Thank you, Stéphane, for selecting the perfect place to celebrate and for organizing the entire evening.

Please click on any of the photos that you would like to enlarge. Stephane's meal is on the right and mine is on the left. It's shown in reverse order because we didn't really start with dessert!
Labels: dinner French restaurant lunch restaurant Vatel International Hospitality school