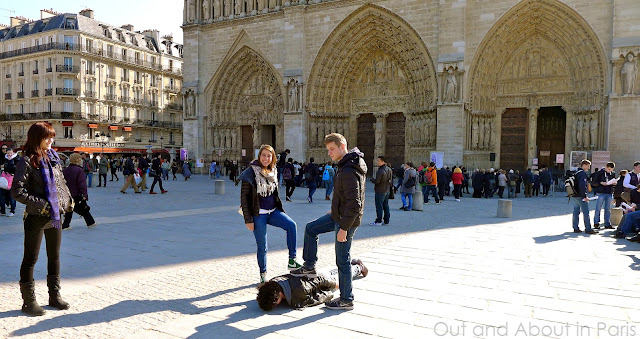 Even though I've been tempted to kiss the ground of Paris after a long absence, there's no way that I would lie face down in front of Notre-Dame. The mere thought of all of the pigeons, dogs and people who have trod across the square would have me squirming. On the other hand, I guess that it would give me the opportunity to more closely consider the ancient paving stones dating back to medieval times. While on my belly, I could also think about how the area in front of the entrance to a French church used to be called paradis (paradise) for obvious reasons and was later shortened to parvis. 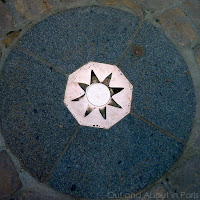 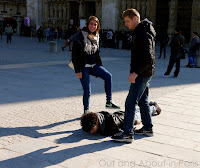 According to the Urban Dictionary, "planking" is when someone, e.g. the young Italian man in the photo, places themselves horizontally on the ground in a strange or unusual place. To qualify as a plank, the body must be straight, while the fingers and toes are pointing down. The plank is named and a cohort takes a photo to put on a social media website, usually Facebook.

While I give the Italian high marks for form and artistic interpretation, his plank would have been so much better if he would have positioned his face over the marker for "kilometre zero", the physical and spiritual center of Paris. Dating back 2,000 years, it marks the spot from which the distance to any other place in France is measured. If you're feeling wild and crazy the next time that you're on the Île de la Cité , I hope that you'll remember to plank over the word, "zero". It would be symbolic of so many things - zero inhibitions, zero concern for the pigeon poop under your nose or zero ________ (fill in the blank).

Thanks to Anne's post on planking in November 2011, I realized what the Italian man was doing and didn't try to save him by administering CPR!

Want to know more about planking?