And the award for the best hot chocolate in Paris goes to... 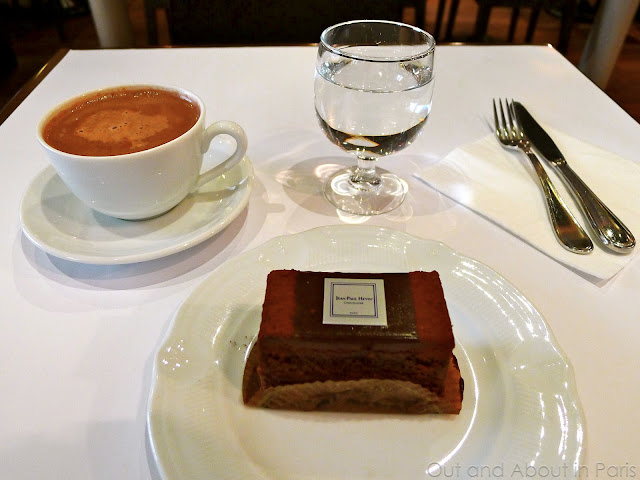 After months of intensive research, my quest for the best hot chocolate in Paris has officially come to an end. Even though I didn’t manage to try all of the places that I would have liked during the cold winter months, my rapidly increasing waistline has convinced me that it’s time to announce the winner before I have to buy a new wardrobe. 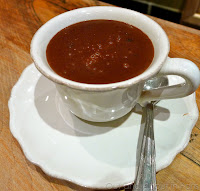 Amorino Gelato Italiano – Scattered throughout the city, this chain is a sure bet if you like thick hot chocolate that more closely resembles pudding than a drink. While it’s not my favorite, their hot chocolate proved hard to resist whenever Stephane suggested that we stop for gelato, his preferred treat. 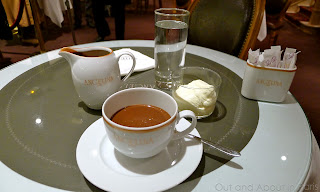 Angelina – After sampling their hot chocolate on several occasions at different locations, I’ve got to admit that it’s consistently prepared to perfection. And perhaps that’s part of the problem. Since there is almost always a long line of tourists waiting in front of Angelina’s Belle Epoque tearoom, the staff is invariably harried and unfriendly. To make matters worse, it’s the only place in Paris where I’ve been asked to settle the bill because the server’s shift is ostensibly finished. When this happened two times in a row, I realized that it’s their way of ensuring that customers don’t linger. Go here if you don't mind waiting for a seat, unpleasant staff and being rushed out the door. 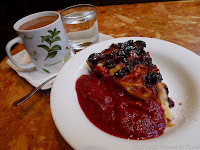 L’heure Gourmande Tearoom (22 passage Dauphine, 75006 Paris) – While this charming tearoom tucked away in a narrow passage is a real delight, the hot chocolate that was served lukewarm was a disappointment. I’ll definitely return for more of their delicious clafoutis with a seasonal fruit coulis but will ask for tea or coffee next time.

Jean-Paul Hevin (231 Rue St Honoré, 75001 Paris) – With hindsight, starting my research with Jean-Paul Hevin’s aphrodisiac hot chocolate with strong notes of ginger and spices was probably a bad idea. After seeing that Le Figaro ranks this chocolatier’s gourmet brew as the best in Paris, it’s the first place that I tried and it’s where I returned time and time again. Trying to keep my habit a secret from Stephane, my cover was blown when the waitress greeted me like an old friend and asked if I would have my regular or try one of the other flavors. With a constantly changing range of exotic options like oyster (an Australian customer assured me that he loved the combination!), matcha green tea and raspberry coulis, it's almost impossible for me to pass the discrete boutique without stopping.

During my latest visit to the sleek tearoom with a modern design, I decided to belly up to the chocolate bar to learn the art of making lusciously rich hot chocolate. 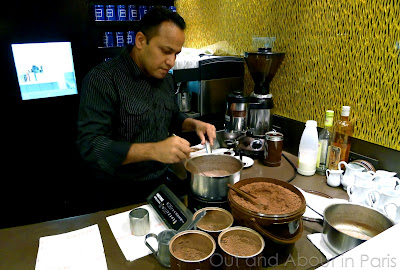 Whisk 60 grams of Jean-Paul Hevin's hot chocolate powder with 300 ml. of whole milk to emulsify the mixture and make it frothy and light. 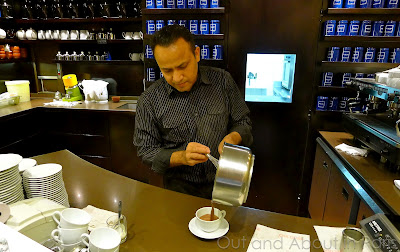 Pour the mixture into a cup. 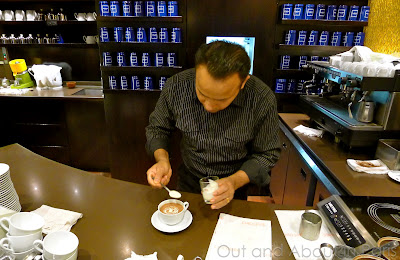 Add the pear and vanilla pulp in swirls. 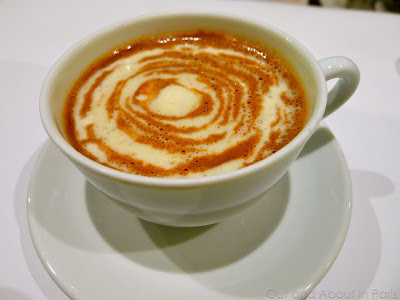 Savor the experience before wondering which flavor you'll try on your next visit!

No doubt about it. My archive of photos of hot chocolate is all the evidence that's needed to indict me on charges of willful indulgence in Paris. But it has been fun!

Stephane's vote goes to the George V. Served in a pitcher with homemade marshmallows, whipped cream and chocolate sprinkles on the side, it's a decadent experience but too expensive for me to drink on a regular basis. I was fortunate that Stephane shared a couple of sips of his hot chocolate when we went there for afternoon tea.

Click here to see how my rankings compare with those of Le Figaro.
Labels: best hot chocolate in Paris insider's tip