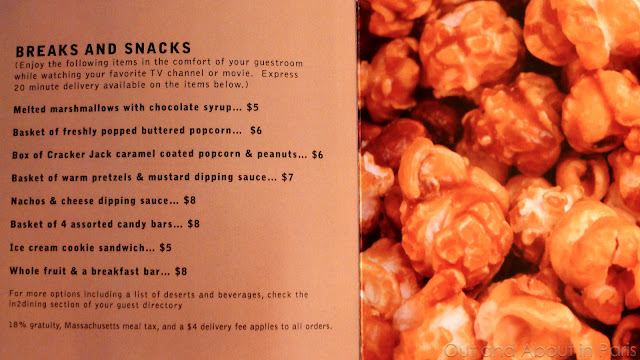 After waking up at 3:50 a.m., I did what most jet lagged travelers do in the wee hours of the morning when they're hungry and can't sleep. I explored my well-appointed room at the Copley Square Hotel and came across a menu for "Breaks and Snacks". Items include:

Don't forget to add an 18% gratuity, Massachusetts meal tax (do any of these items really qualify as a "meal"?) and a $4 delivery fee. That means that a box of Cracker Jacks costs over $10! Even for a starving traveler whose stomach is still on Paris time, that's an exorbitant amount of money - I just hope that they still put prizes in boxes of Cracker Jacks. 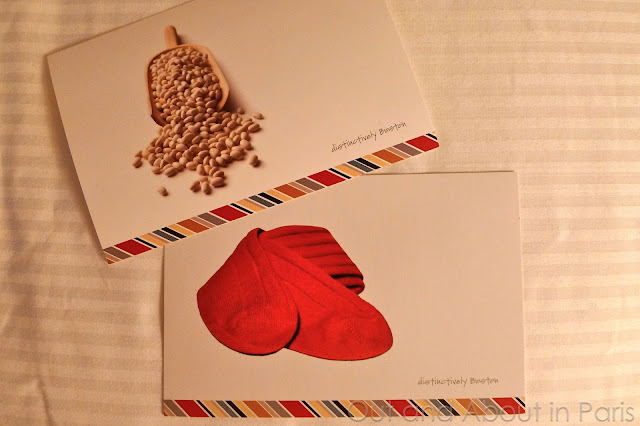 It took my jet lagged brain a couple of minutes to figure out these "distinctively Boston" postcards. At first, I couldn't understand why a boutique hotel would supply their guests with cards with socks on them. And then the fog lifted and I realized that they were red socks - as in the Boston Red Sox, the baseball team! The scoop of beans refers to Boston's nickname, "Beantown" which dates back to colonial days when baked beans was a favorite food. Thanks to the triangular trade that brought molasses to New England, rum to West Africa and slaves to the Caribbean colonies, Bostonians combined beans with molasses and slow cooked them for hours to create the famous "Boston Baked Beans". There was even a "Great Molasses Flood" that killed 21 people in 1919 when a tank holding molasses for rum production exploded.

With molasses on my mind, it also took me some time to decipher the meaning of the "Thickly Settled*" sign that I saw on Cape Cod this afternoon. For someone who lives in a densely populated city like Paris, it seems like an overstatement for Falmouth, Massachusetts!

*According to Massachusetts' law, a thickly settled area is one where houses average less than 200 feet apart for 1/4 mile. Hailing from the Midwest, I've never encountered this street sign before. Has anyone else - or is it unique to Massachusetts? 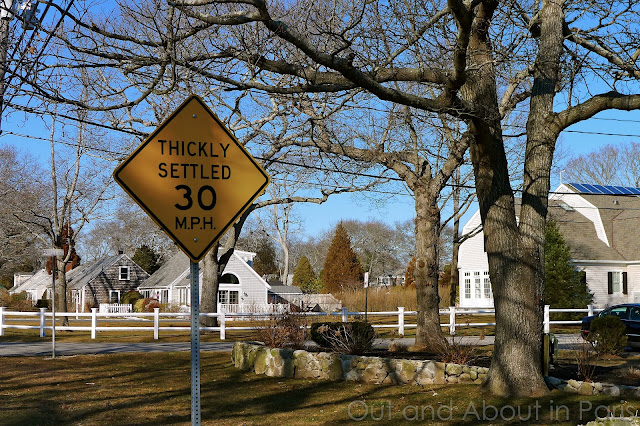