Before anyone jumps to conclusions and thinks that the title of this post is the equivalent of a status change on facebook, rest assured that Stéphane and I are still happily married. But in between his traveling for work and supporting his parents during a difficult time in Geneva, I'm "single in Paris". Since the only people I know are married and I don't feel comfortable asking them to leave their families to go out at night, I frequently attend events on my own. And I've got to admit that it isn't so bad because I always end up meeting the most fascinating people. 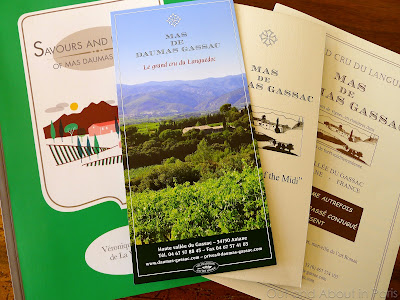 Take last night as an example. Even though I was tempted to stay home and watch another episode of "Downton Abbey" (I'm hooked!) or wait until one of my kids appeared on Skype, the pull of an author event at the Irish Cultural Center proved too hard to resist. Plus, there was free wine - and I'm a sucker for anything with free wine, especially if it's Le Grand Cru du Languedoc.

After listening to Dr. Véronique Guibert de la Vaissière engaging talk about her field research in Ireland, her affection for the Irish people, her vineyard, Daumas Gassac, and her new cookbook, Savours and Flavours of Mas Daumas Gassac, I had a great time sipping sparkling rosé and chatting with other people who were on their own. In an off-beat mixture of Franglais, I had a lively conversation with a 20 year old Frenchman who professed his undying love for New York and Miami. Imagine his disappointment when I told him that I'm from the Midwest. To make matters worse, when I tried to evade his question about where I live in Paris by mumbling the response, he practically shouted, "Mais, le 16th - ca c'est la plus pire arrondissement for someone young like me. There's nothing there!"

By this point, our animated conversation had attracted a French actress, who is also known as the macaron queen by her friends. Even though she has lived in Paris for 30 years, she revealed that she had only discovered Ladurée two years ago when she noticed a long line in front of the restaurant on rue Royale. She laughingly told me that up until that point she had only thought that standing in line is what actors do while looking for work. She never realized that people would queue up for something to eat...until she discovered those little bites of heaven and then started making them herself. Her speciality is mint chocolate.

So, if you don't want to sit at home or in your hotel room by yourself, check out the schedule of activities for the fifteen cultural centers in Paris. Here's a partial list to get you started:

Click HERE to see the complete list of cultural centers in Paris. If you're interested in a particular country, sign up for their monthly newsletters for advance notice about upcoming events.
Labels: cultural centers daily life insider's tip Irish Cultural Center