Beyond Cool! Special-T at the Shangri-La Hotel thanks to "My Little Paris"!


One of the most important things that I've learned about living in Paris is that it pays to act first and work out the details later. So, as soon as I received an intriguing invitation from My Little Paris for a romantic tea with my lover at one of the most beautiful hotel suites in the city, I grabbed the phone to make a reservation. All of their other readers must have nimble fingers and lightening fast reflexes because the line was busy...busy...busy. After hitting redial numerous times, it was a relief to hear that there were still a couple of spots left at my preferred hotel, the recently opened Shangri-La, a luxurious five-star hotel near the place du Trocadéro.

The devil is in the details - since Stéphane is in Geneva this weekend and we haven't adopted the Parisian habit of having "his and her" extramarital affairs, I was at a loss as to which lover I should ask to accompany me this morning. Realizing that a single woman would probably look rather strange among the amorous couples, I nonetheless set out for the Shangri-La because there was no way that I was going to miss out on this delightful event just because I don't have a paramour. I'll know better for next time and plan ahead! 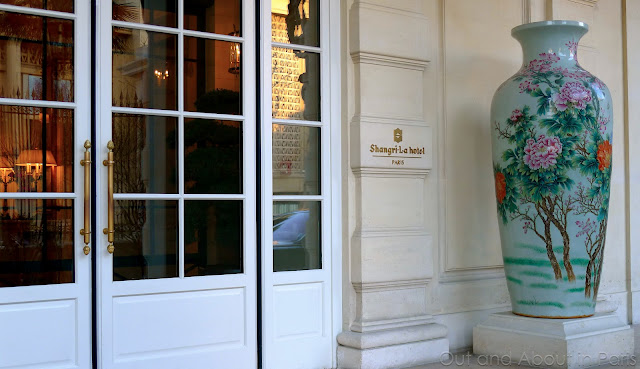 After passing through the doors of the Shangri-La, the former home of Prince Roland Bonaparte that has been meticulously restored, I was told to proceed to suite number 41 on the fourth floor. Still feeling slightly apprehensive yet rather adventurous, I rang the bell and was ushered into the two-floor suite with a view of the Eiffel Tower. Sigh... How romantic!


Walking down the steps to the first level, I was warmly greeted by the Special-T hostesses and a young couple sitting on the couch. The man immediately broke the ice by offering me one of the exquisite pastries, while the hostess explained the range of exclusive teas that are made with a Special-T machine, the Nespresso equivalent for tea aficionados. While sipping my Imperial Black Tea, the young couple revealed that the husband had invited his wife to an unknown destination this morning that just happened to be a beautiful suite at the Shangri-La Hotel. It just goes to show that women aren't the only ones who like to surprise their partners!


While we were talking about what a great idea it was to offer people the opportunity to sample tea in such luxurious surroundings, another lone woman walked down the steps. She turned out to be a real estate agent, which was rather serendipitous because Stéphane and I are toying with the idea of buying our own little piece of Paris. All too soon, my second tea was finished and it was time to go, but not before I registered to win a night in the suite. My fingers are crossed that I'll be the lucky winner and that Stéphane will be in town to enjoy it with me.

This was by far one of the coolest things that I've done in Paris! Kudos and thanks to My Little Paris, Special-T, the Shangri-La Hotel, La Belle Juliette Hotel and the boutique Hotel Seven for organizing it. If you're not already on the mailing list for My Little Paris, I highly recommend it. It's one of my favorite sources when I'm looking for interesting and unusual things to do.

Disclaimer: Even though Stéphane works for a certain Swiss multinational that owns Special-T, I wrote about this event because I thought that it was over-the-top fantastic not because of his affiliation with the company. He didn't know about this promotion until he heard my rave reviews.