C'mon Paris - Give the people who don't speak French a break! 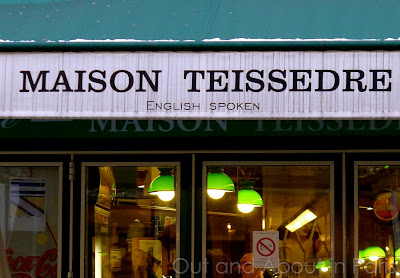 While there's no way that I want all of the cafés in Paris to start boasting about their English speaking employees like Maison Teissedre, I was pretty annoyed when I first noticed the following sign on the door of the Musées des Arts Décoratifs on Saturday.

Imagine that you're a visitor from Asia - make that a shivering visitor from Asia because it's really cold in Paris - and you arrive at the entrance of the museum. You've been looking forward to seeing their extensive decorative arts collection ever since you booked your trip 6 months ago, so you're extremely disappointed to see the red barrier blocking the entrance and this sign on the door. What does it say? Moving your head from side to side, you try to make sense of it and are just about ready to give up when you see someone scurrying past. You haltingly ask for help in English, the other language that you speak besides your own.
This really happened - I know because I was hustling to get out of the cold when a timid young Asian woman approached me for help with the sign. She sighed with relief when I explained that the door was closed because of the cold weather and that she could still visit the museum by using the main entrance located on the rue de Rivoli.
I snapped a photo of the sign but didn't really plan to use it for a post until I was, once again, hustling to the museum for a tour yesterday and almost slammed into the red barrier. I should have known that the door was closed because there was a large group clustered around the sign trying to figure out the words while the security guard stood inside and motioned dramatically with his hands.
After telling the group of Russian tourists that they could enter the museum on the opposite side of the building, I had plenty of time to fume about the fact that there still wasn't a sign in English on the door as I hurried to the entrance on the rue de Rivoli. I understand that I live in France and that the national language is French, but as the most visited city in the world, Paris could give the people who don't speak French a break...especially when it's so cold outside!
To lighten the mood after my rant, here are a few other signs that I saw yesterday: 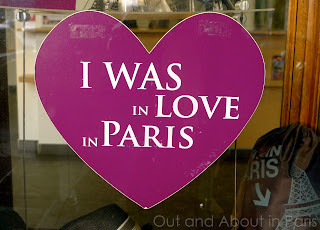 I think I may know why the French don't post many signs in English. "I was in love in Paris" sounds tragic. Questions like, "What awful thing happened in Paris?" and "Why are you no longer in love?" popped into my mind as I studied this sign in the window of Cityrama, a company that organizes tours of Paris and France. Compare the English sign with the one in French that proclaims, "St. Valentine's Day in Paris is romantic". 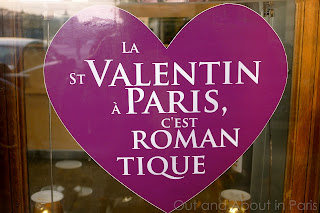 And finally, just in case my Swiss editor needs some help remembering the date, this sign in a chocolate store on rue Saint-Honoré is counting down the days until the big V -- that's right Valentine's Day.
Labels: daily life French culture French language