I'm one of the ladies who lunch...with Julia Child!


Yesterday morning was bitterly cold - so cold that I put on two thermal undershirts, one turtleneck and another sweater. While I looked like a little kid ready to go out and play in the snow, I was actually going for a walking tour featuring some of the places that Julia Child frequented when she was a resident of Paris.

Our first stop was Julia's apartment, which she described as follows:
In the meantime, I had discovered an apartment building for rent that was large, centrally located, and a bit weird.  It was two floors of an old four-story hôtel particulier, at 81 rue de l'Université. A classic Parisian building, it had a grey cement facade, a grand front door about eight feet high, a small interior courtyard, and an open-topped cage elevator.
As an incredibly rare treat, our tour guide had organized a brief meeting with the woman who is the daughter-in-law of the owner of the building when Julia lived there. Madame charmed us with tales of her in-law's relationship with the Childs and said that Julia was fondly remembered for her cheerful personality, which reminded me of one of my favorite passages from My Life in France:
The sweetness and generosity and politeness and gentleness and humanity of the French had shown me how lovely life can be if one takes the time to be friendly.
After visiting the former site of the Cordon Bleu Cooking School before it moved to the 15th arrondissement and Julia's favorite kitchen-equipment store, E. Dehillerin, we were ready for lunch at Au Pied de Cochon, the legendary Parisian restaurant that hasn't closed its doors since 1947. Unlike Julia, however, we didn't dine in the wee hours of the morning:
After the club closed, at 3:00 a.m., we went on to Les Halles [the old market in Paris] and walked around admiring the "forts des Halles"--the barrel-chested market workers--unloading crates of fresh watercress from trucks, stacking freshly cut flowers, and preparing for the day. It was cold and dark, but the vast marketplace was beautiful under splotches of yellow electric light. As dawn lightened the edges of the sky, we found ourselves at "Au Pied de Cochon" for a traditional bowl of onion soup, glasses of red wine, and cups of coffee. At five-fifteen, we straggled home.
According to Philippe, the man in the first photo, there's a traditional song that people sing while gathered at Au Pied de Cochon. Like a determined choir director with a rather strange nose, he had us rehearse before joining us in a rousing performance of La Chanson du Pied de Cochon. His hard work and dedication earned him a kiss on the check from one of the ladies who lunch. I'm sure that Julia would have approved. Oh, la, la - that's one happy Frenchman!
Au Pied de Cochon
6, rue Coquillière
75001 Paris
Open 7/7 and 24/24 - it never closes! 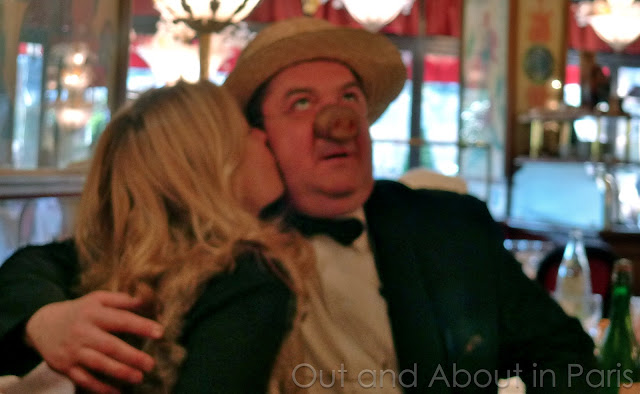