Sandwich and Snack Show in Paris - the latest trends in snacking! 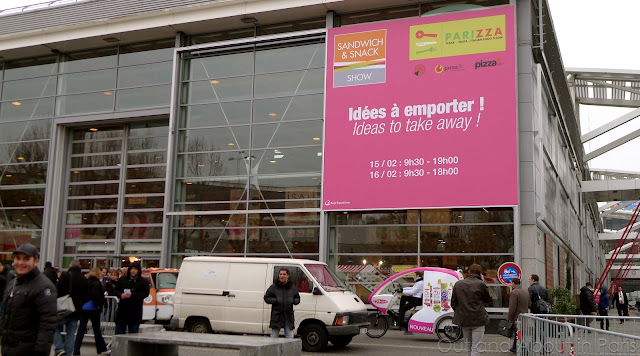 When Patricia posted a comment a couple of weeks ago telling me about the "Sandwich & Snack Show", I was intrigued because snacking is a relatively new concept in Europe. Frequently named as the cause of obesity in the United States, snacking has more often been viewed with suspicion than as something to promote. So, there was no way that I was going to miss this event even though it meant dashing out to the convention center at Porte de Versailles Thursday morning before meeting a friend for lunch near the Louvre. I'll have to plan better next year because I would have happily sampled more donuts, sandwiches, bagels, pancakes and sushi if I hadn't already arranged to eat a "proper" meal.

With more than 300 exhibitors from 65 different countries and an estimated 12,000 visitors, snackable food, described as nourishment that is easily eaten even while standing or in motion, is seen as a model of virtue by the younger generation, who prefer to consume their food more quickly than their parents. According to the information in the press kit, French people eat the same proportion of take-away food as Americans, but the products are very different. Take a look at the photos and let me know what you think! 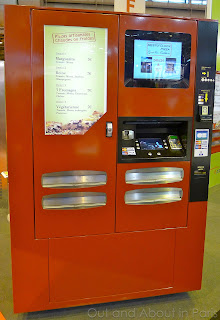 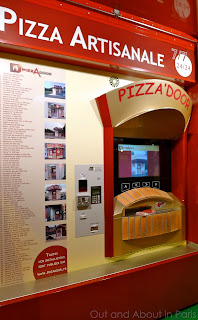 or crepes made with sprinkle on flavors like apricot, strawberry, coconut and honey, 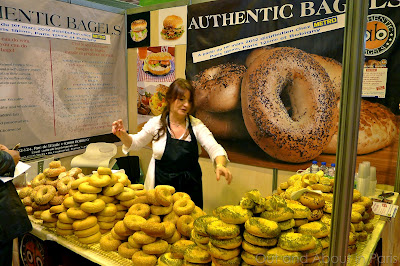 I've noticed that bagels are becoming more popular in Paris. 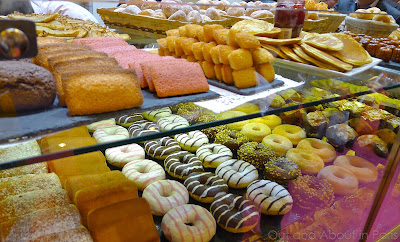 Even though the display case full of donuts looked reassuringly familiar, I did have to question why they were serving the pancakes on the top shelf with jam rather than maple syrup.
63% of the sandwiches sold in France are currently made using a baguette and two out of three are made with cheese and/or meat, such as ham. If the 2012 winners of the DeliFrance Sandwich World Cup are any indication, ingredients like marinated sardines, confit tomatoes and lotus root may change the way we think about what we put on our bread. Held in conjunction with the "Sandwich and Snack Show", the sandwiches created by the international candidates are judged on the basis of 5 criteria: practical aspect, aesthetic qualities, originality of the recipe, nutritional balance, cost price less than €2. 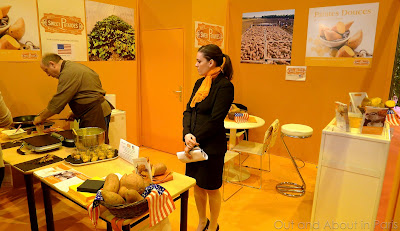 As I would prefer buying sweet potatoes that are rich in fiber and vitamins rather than donuts from my local grocery store, I was pleased to see Chef Martial hard at work at the stand for the North Carolina Sweet Potato Commission.
Many thanks to Patricia for telling me about the "Sandwich and Snack Show". It was a delectable treat! Please let me know if you hear about something interesting that's happening in Paris. I truly do appreciate it.
Labels: American culture baguette cultural differences food French culture Sandwich and Snack Show