Stéphane's pick of the day: brunch at Saint James Club 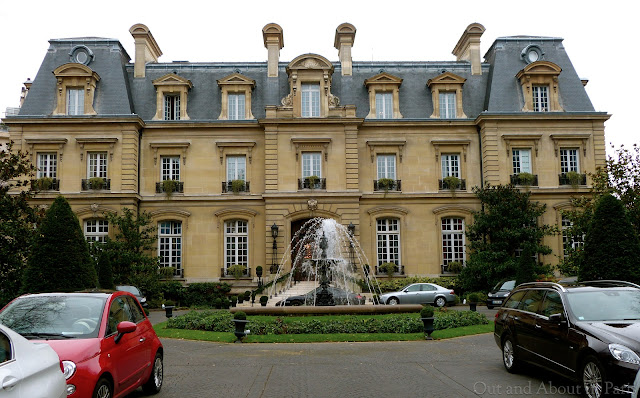 Just as I was about to turn off the reading light next to my bed after a long day at Disneyland Paris last Wednesday, a very enthusiastic Stephane returned home from a business dinner bearing a couple of embossed booklets that he thrust into my hands. "I want to take you to this place!" he exclaimed in an excited voice that was a surprising change from his normally reserved demeanor. As I started to place the pamphlets on my bedside table, Stephane opened the black booklet with a discrete "Saint James Club" written on the front and pointed to a photo of Le Club. "This is where I had dinner, at a castle in the 16th arrondissement!" Feeling slightly superior after having just visited Sleeping Beauty's castle at Disneyland, I scoffed and said that I highly doubted that it was a real castle, with a great deal of emphasis on the word, "real". Undeterred, Stephane opened a thick envelope full of oversized postcards and pointed to a photo of the magnificent maison particulier that did look rather castle-ish in an aristocratic, non-Disney sort of way. Realizing that he finally had my full attention, Stephane added that Le Club was also the location of an aerodrome, the first in Paris, used by hot air balloons. As I flipped through the photos showing a spiral staircase in a library full of leather bound books, a luxurious restaurant richly decorated in the style of Napolean III and a terrasse with three large hot air balloon pavillons, I asked Stéphane when he was going to take me to the Saint James Club. Always prompt to fulfill his promises, Stéphane invited Sara and me to brunch last Sunday, which is one of the times that the private club/hotel is open to the public. Not knowing that brunches in Paris normally last until 4:00 pm, we arrived at 11:30 am, a popular time for brunch in the USA. The advantage to getting there so early was that we had the dining room to ourselves and could imagine that we were seated next to the marble fireplace in our own private mansion.

After enquiring if it was our first time to have brunch at Le Club, the waiter invited us to help ourselves to the wide selection of cheeses from the historic Crémerie Quatrehomme on rue Mouffetard, smoked salmon, salad and other items from the cold buffet and main dishes, like grilled tandoori salmon and veal stew. With a charming smile, he added that crêpes and eggs are made to order.

As we sipped our champagne and contemplated what it is that makes Bordier butter so superior to the butter that we've had elsewhere in the world, the restaurant slowly filled with groups of extended French families and friends ready to enjoy a leisurely Sunday afternoon together. Pleased to have been the one to introduce us to Le Club, Stephane smiled broadly as Sara and I made plans to return to the bar for drinks after Philippe, the only missing member of our family, arrives in Paris shortly before Christmas.

Located just off of the famous Avenue Foch, the Saint James Club is a private club and a Relais & Châteaux hotel that is open to non-members for dinner from Monday to Saturday and for brunch (60 euros per person, 70 euros with champagne) on Sunday. Please click here to see the album of photos posted on "Out and About's" facebook page.

Stephane, who was given a tour of some of the rooms and suites after his business dinner, was impressed by the feeling of grandeur and intimacy created by Franco-American designer Bambi Sloan, who recently redecorated Le Club. Perhaps I'll have an opportunity to see some of the rooms the next time that we're there. In the meantime, I'm still trying to figure out which spices they used to flavor their fresh tropical fruit salad. With exotic hints of cinnamon, star anise and cardamom, it's the best that I've ever eaten.