Disneyland for adults? An adventurous night at Hotel Seven in Paris!


What a contrast! On Wednesday evening, Sara, Gwan and I were surrounded by screaming children and crying babies as we toasted Gwan's 30th birthday in the bar of the Disneyland Hotel. Everyone was exhausted after spending an exciting day at the happiest place on earth and it showed. The parents, who were gulping down florescent colored cocktails to ease the pain in their ears, looked stressed beyond belief as they patiently dealt with the tantrums and the tears. The chaotic pandemonium brought back all too vivid memories of the days when my children were small.

On Thursday evening, I visited an entirely different kind of hotel. Located next to the Latin Quarter and a short walk from the renowned rue Mouffetard, Hotel Seven is the perfect place for a romantic interlude in Paris. Whether you've ever fantasized about spending a night in Marie Antoinette's boudoir or James Bond's sleek lair, the seven different suites in this boutique hotel are designed to serve as a backdrop for your imagination. With levitating beds seductively strewn with rose petals, luxurious shower stalls large enough for two and an open fireplace in the "Lovez Vous" suite, Hotel Seven is like a Disneyland for adults.


Not surprisingly, many of the guests at Hotel Seven are Parisians seeking respite from their frantic lives. Instead of planning a romantic getaway outside the city, savvy couples leave their children with the grandparents and head straight to the boutique hotel on Friday evening. Some of the guests have even arrived with blindfolds covering the eyes of their spouses after offering them the ultimate present. Time together. And best of all, the last hours of their amorous weekend aren't spent sitting in the endless stream of traffic returning to Paris on Sunday nights. Even though Stéphane and I no longer have small children, I'm going to keep Hotel Seven in mind. It would be the perfect antidote to our full house of visitors during the holidays. Plus, our wedding anniversary is this month! 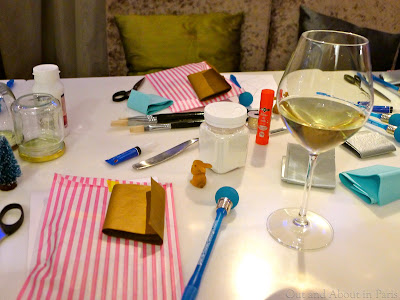 But visiting the hotel wasn't the only event on the agenda. After oohing and aahing over all of the special touches in the rooms, we made our way to the breakfast room for a DIY Craft Party organized by Do It Yvette. Sitting across from Jacki, the winner of my "Happy Holiday Giveaway", was a rather intimidating experience because not only is she the mother of an adorable little boy, Jacki worked at a school for children and adolescents with special needs in the United States. She's a whizz with a pair of scissors! Thanks to the careful tutelage of Do It Yvette, I made a Christmas ornament and snow globe that I was proud to show to Stéphane and Sara after I returned home from a very enjoyable night out in Paris.

Many thanks to Do It Yvette for hosting the DIY Craft Party and to Jacki of HJ Underway for joining me! 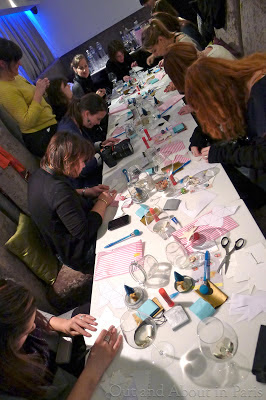 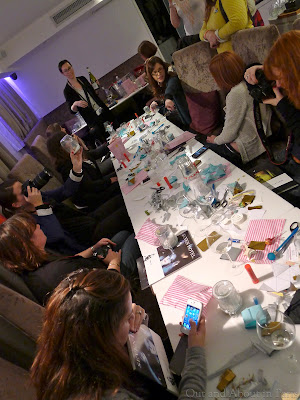