Sara's pick of the day: bánh mì at Saigon Sandwich and cappuccino at Ten Belles 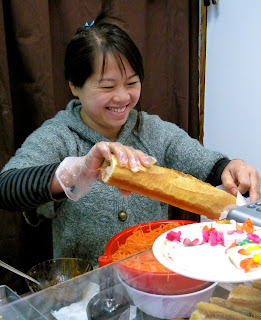 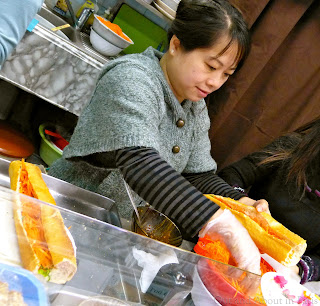 "It's all about the sauce!" At least that's what Sara kept telling me when she said that she was craving bánh mì and asked if I knew of a place to get them in Paris. Since I hadn't ever eaten one of these Vietnamese style sandwiches served on a baguette, I asked for help on Twitter:


Mary Kay ‏@OutInParisBlog
Anyone have recommendation for where to get Banh Mi (Vietnamese sandwich) in Paris. Daughter's craving one.

Within minutes, I received a response from Richelle VHP with a link for the six best bánh mì according to L'Express.

Richelle VHP ‏@RichelleVHP
@OutInParisBlog I've heard really good things about Banh Mi in the Marais. Look at this too: http://blogs.lexpress.fr/styles/la-soif-du-miam/2012/03/22/top-6-des-meilleurs-banh-mi-de-paris/ …

Deciding to start at the top of the list, we headed to Saigon Sandwich, a tiny hole-in-the-wall gem in the 11th arrondissement. As we watched the two women behind the counter stuff crispy baguettes with freshly grated carrots, thinly chopped cucumber and sprigs of cilantro, we deliberated between lemon chicken, pork or beef satay for the amazingly low price of 3-4 euros. Ten minutes later, we were shivering on a park bench savoring each mouthful of these unique sandwiches that are a delightful marriage of piquant Vietnamese flavors and French bread.

Shortly after we had thrown away the empty bags from our bánh mì, I received the following tweet from Anne about a place in the 13th arrondissement.

Anne ‏@JustAnneinParis
@OutInParisBlog If it's not too late: Thieng Heng on avenue d'Ivry right next to the main Tang Freres.

As luck would have it, Thieng Heng is right next to the Chinese grocery store where I'm going to get some mangosteens for Sara's birthday treat in two weeks. I guess that I'll have to make a slight detour! 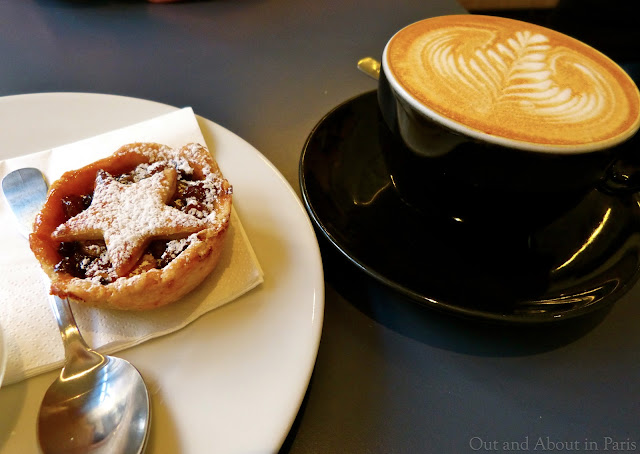 One good thing then led to another. With frozen fingers from our bánh mì picnic, Sara and I were in dire need of a hot cup of something when Yelp (the app) came to the rescue with a recommendation for a nearby cafe just off the Canal St. Martin.  It felt wonderful to claim the last two available spots - only recently vacated - in the tiny hip coffee shop, mysteriously named "Ten Belles". According to Sara, "Two Beaux" would have been more accurate given the two male baristas. Maybe the belles were in the back baking the delectable home-made mince pies, while the men skillfully prepared the best cappuccino that I've had in Paris.

Oh, now we get the name... Please click here to see more photos of Ten Belles on facebook.