Escape into the Marvelous World of the Musée des Arts Forains 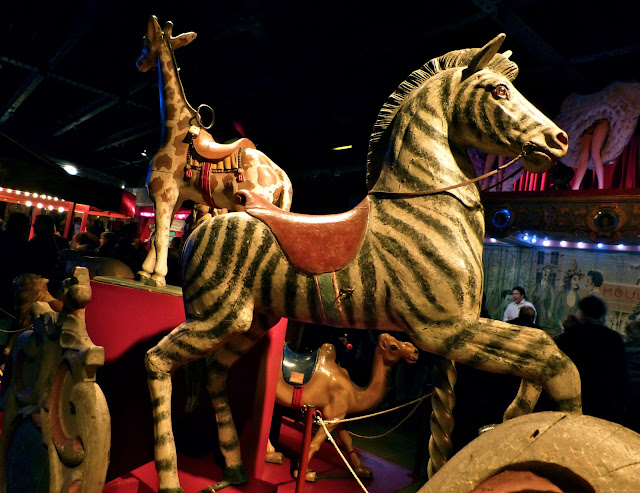 Occasionally, people ask me if Stéphane is a spy. It's probably because questions about my husband's whereabouts have been known to elicit some rather cryptic responses: "He might be in Italy because he was in England yesterday" or "He was at a conference in Switzerland the last time we spoke so maybe he's still there." Now, I don't know how James Bond copes with early morning departures on crowded planes followed by late night dinners with colleagues, but Stéphane's travels had left him feeling exhausted during the days leading up to Christmas. He was in dire need of taking some time off from being a serious adult.

Fortunately, my Swiss husband is also a kid at heart, who happily accompanied me to the Musée des Arts Forains for a fun outing with Anne of "Just Another American in Paris" and her family. While the rest of us were admiring the elaborate costumes from the Folies Bergère in "The Marvelous Theater", Stéphane was busy buying a handful of tickets for the Belle Epoque amusement park rides and attractions in "The Fairground Art Museum". Before I knew it, he had disappeared into the crowd forcing me, once again, to give enigmatic answers to questions concerning his whereabouts: "Stéphane might be riding the bicycle merry-go-round" or "He was playing the 'Parisian Waiter Race' with Sara the last time I saw him so maybe he's by the Japanese billiards game now."


If you're in need of a break from reality, I highly recommend visiting the magical world created by antique dealer and actor Jean-Paul Favand. Exceptionally open through the 6th of January, the Musée des Arts Forains is even more fantastic than I had imagined it would be after seeing it in the movie Midnight in Paris. It's not surprising that Woody Allen decided to use it as the setting for F. Scott and Zelda Fitzgerald's roaring 1920s party.

Many thanks to Anne for suggesting that we go to the Musée des Arts Forains. I only wish that our time in Paris had overlapped so that we could have explored other places together!