Looking for the Gingerbread Man in Paris


What started as a simple expedition to take a picture of the big Christmas tree and ferris wheel at the Place de la Concorde quickly turned into "Project Gingerbread Man" when Stéphane and Sara decided that we needed a real Gingerbread Man to pose in a photo that I was taking for Joseph the Butler. By the end of the day, the Gingerbread Man had been spotted at the Christmas Market on the Champs-Élysées, in front of the Eiffel Tower, having tea at the Shangri-La, riding the metro and hiding on a pedestrian light. It was all a good-spirited effort to help Mrs. H's class in North Carolina, who are currently looking for the Gingerbread Man. Here's the letter that my daughter Sara wrote to the fourth graders:

A little birdie [aka Joseph the Butler], who’s friends with A and Grandma S, told me you’ve been looking for the Gingerbread Man.  I, too, have been looking and looking and looking. I looked for him on the plane yesterday when I flew from New York to Paris. I looked in the airport when I arrived but only found my parents.  I kept looking for him out of the window when we drove home, but no Gingerbread Man. 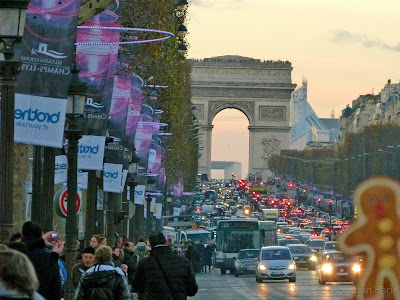 Later that day, I went for a walk by the Seine River. I was sad that the Gingerbread Man had run off so fast and that I didn’t get a chance to tell him I wouldn’t eat him. I told myself I should be happy that at least I caught a glimpse of him in a picture… when, lo and behold, there he was again! I think he thought I couldn’t see him because he was trying really hard to blend in to background. Can you spot him in this second picture pretending to be another famous monument in Paris? 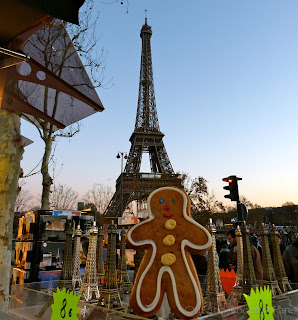 I decided to approach him really slowly and pretend like I didn’t see him there, pretending to be a mini-Eiffel Tower. Moving as cautiously as I could, I went closer, and closer, and closer… Just when I was about to say “Gingerbread Man, I promise I won’t eat you” he jumped off the shelf and disappeared. From a distance, and ever so faintly, I could just hear him say, “Run, run as fast as you can, you can't catch me, I’m the Gingerbread Man”.

Good luck with the rest of your search!