It's a Winter Wonderland - Ice Skating at the Grand Palais 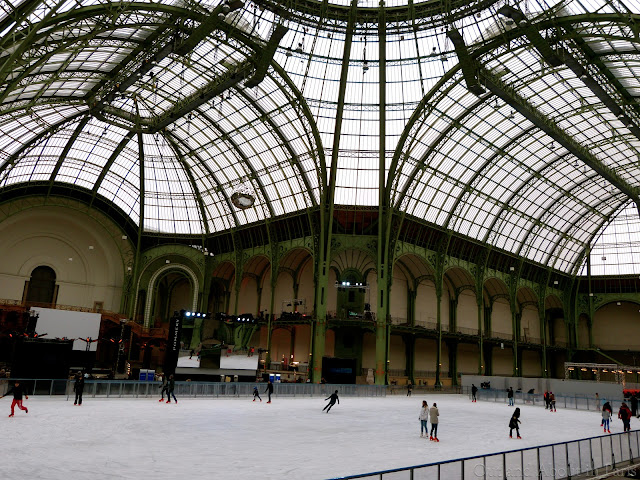 From an outdoor rink surrounded by mountains in Saas Fee, Switzerland to an indoor rink in a glitzy shopping mall in the tropical city of Surabaya, Indonesia, I've skated in some fairly unique settings. But I can honestly say that none of the other locations matched the Grand Palais in Paris. The only drawback was that I had to keep reminding myself to look down at the ice rather than up at the magnificent glass barrel vaulted roof. It's an impressive structure!

Arriving shortly after the doors opened at 10:00 yesterday morning, Sara and I whizzed past all of the metal barricades set up in anticipation of the 200,000 visitors that will flock to the Grand Palais during the holidays. In no time at all, we had picked up the tickets that I had purchased online, passed the security check point and were trying to decide if I should get size 38 or 39 skates. If you're like Sara and travel with your own pair of skates, it's helpful to know that there aren't any lockers to stow your shoes. Fortunately, the man behind the counter agreed to put them with mine but this option probably won't be possible when there are more people. There's a cloakroom, located to the left of the rink, where it's possible to check coats and large bags, for 2 euros per article. Additionally, there are a couple of vending machines that sell gloves, which are required, and socks. 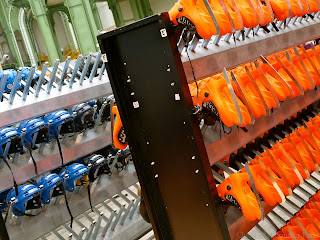 As we glided on to the largest ice skating rink in France, I thought about how much our adult-aged children will enjoy sharing this experience with their friends while they're visiting from the USA. Even though New York and Boston have ice skating rinks, I'm fairly sure that they don't have a skate-up champagne bar that also serves hot chocolate and coffee. According to the weather forecast, it's supposed to snow inside (that's right - inside!) the Grand Palais once every hour. The meteorologists were wrong yesterday, but that's probably because it was opening day. When everything is working as it should, it's going to be magical.

With a huge disco ball, lots of lights and a stage, ice skating at night in the Grand Palais will also be an amazing experience.

The ice skating rink will be at the Grand Palais through January 6, 2013. Please click here to consult the official website for more information about the opening hours and to buy skip-the-line tickets. The 12 euro entrance fee includes the skate rental. The price is the same if you bring your own skates. 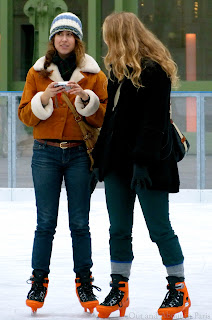 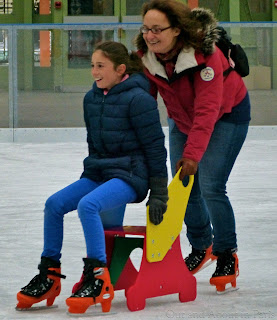 Time for me to go pick up a copy of Le Parisien from the new stand because a photographer took quite a few photos of Sara and me while we were sipping champagne at the skate-up bar yesterday. When one of them asked to interview us in French, I have to admit that I was a bad mother who left Sara to fend for herself. Much to her relief, they didn't use her interview in the clip, but they did show a fleeting glimpse of her gazing at the rink with a champagne flute in her hand. Please click here if you would like to see the video and here to see the additional photos that I posted on facebook.