A word of warning - keep an eye on your purse in Paris! 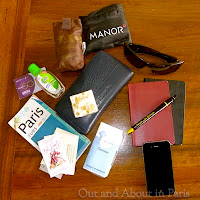 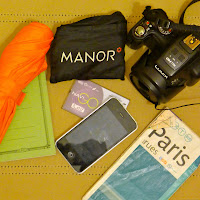 Do you notice any difference between the things that I carried in my purse in August 2011 and those that I toted around with me this afternoon? Even though the piece of nougat in the picture on the left was eaten long ago and I've exchanged my sunglasses for an umbrella, the contents of my purse haven't changed significantly in the past sixteen months. There is, however, one very important item that's missing. My wallet. It was stolen while I was having lunch with my son Philippe and two friends today.

After piecing together the different bits of information gathered from the waiter and the people at our table, here's what we think happened. The thief entered the restaurant on his own and requested a table for four because he said that he was meeting friends. Absorbed by our conversation, I didn't pay any attention when the thief sat down at the previously empty table behind us and made the mistake of leaving my purse on the floor between Philippe's and my chairs. In the midst of our discussion, one of my friends noticed that the thief's jacket kept sliding off the back of the chair but didn't think much about it until I suddenly looked down and saw that my purse was wide open and my wallet was missing. By that time, the thief was long gone.

Playing detective after the fact, we suspect that the thief unzipped my purse and stole my wallet while he was ostensibly picking up his jacket from the floor.

Instead of going Christmas shopping as I had planned this afternoon, I went to the police station in the 9th arrondissement to report the theft and to the bank to try to get a replacement debit card. Because of the holidays, there's little chance that I'll receive it before the start of the new year. I'm also going to have to get a new Swiss identification card, French drivers license, French social security card etc., etc. The good news is that the thief didn't take my phone, camera or Navigo pass.

Even though I'm very annoyed with myself for not keeping my purse on my lap as I normally do, a bomb threat at the international arrivals hall while we were picking Philippe up at Charles de Gaulle Airport on Wednesday was a vivid reminder to be thankful that our children traveled to Paris without any mishaps. Our family is together for the holidays and that's what counts. Not the material items that I carry in my purse.
Labels: purse theft thief things I carry