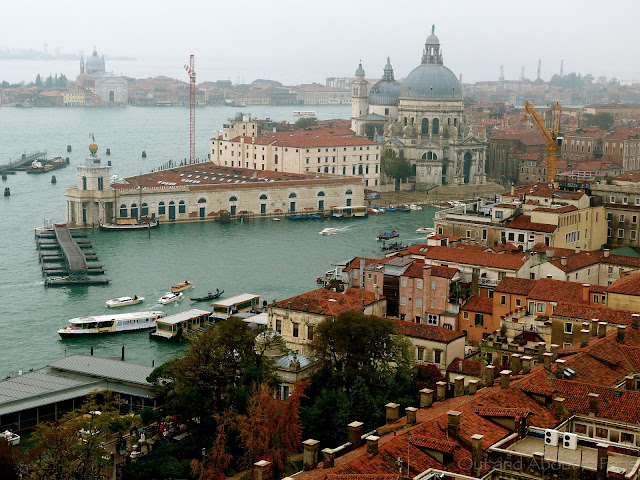 Now that my feet are dry and I have access to a reliable internet connection, I've thought of a couple of tips in case you're ever on holiday in Venice during acqua alta ("high waters"). 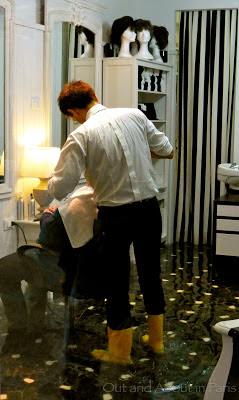 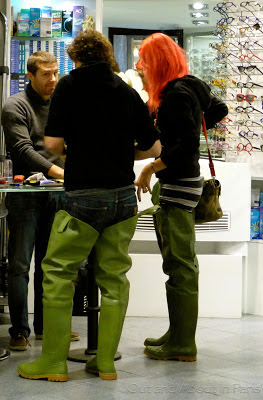 Fashion: Whether you're a hairstylist working in a flooded salon or a couple of hipsters, Wellies are a must-have item when water from the Adriatic Sea flows into the streets of Venice. This new trend has reportedly spread to France because alert fashionistas spotted a large number of people wearing rubber boots as they disembarked from an EasyJet flight arriving at Paris Orly Airport late last night. 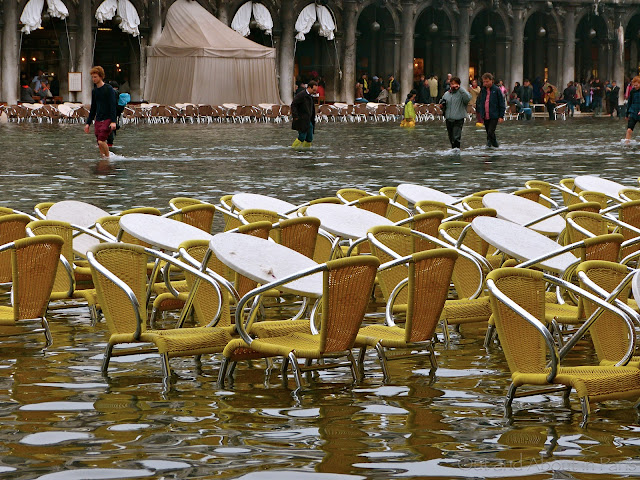 Dining: With great people watching opportunities and live music, the restaurants at the Piazza St Marco are always a popular choice. Just be sure to ask for a seat in the "water free" section.

It's also helpful to know that it's illegal to eat gelati, pizza and bag lunches on the steps around the square. According to a recent article in the New York Times, the city's director general wants to avoid a situation where the 25 million tourists who visit the Piazza St. Marco every year have to manoever their way around other people snacking on salami sandwiches. 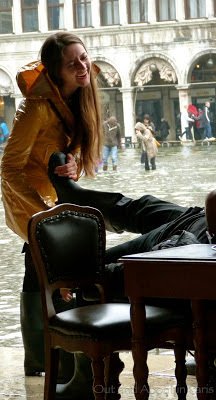 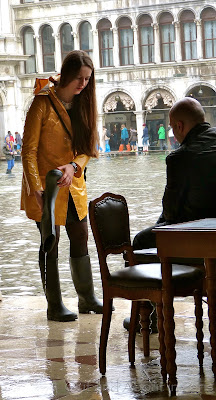 Activities for newlyweds: Removing each other's boots to drain the water out of them is much more romantic than a gondola ride! This couple had such a good time that they even asked a passerby to take their photo as they reenacted all of the tugging and pulling. 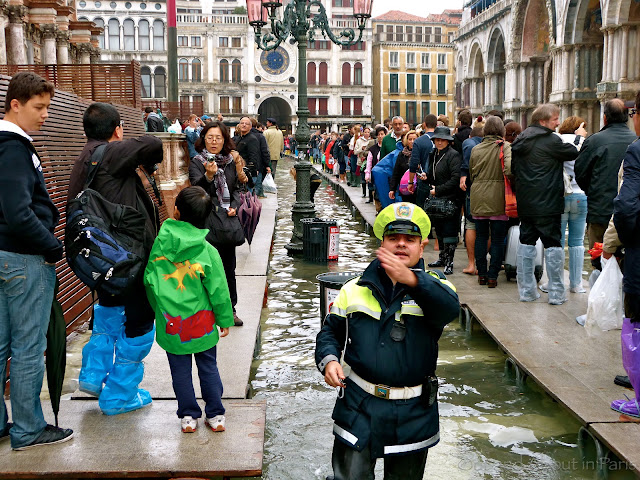 Language: It helps to know some basic words in Italian, like "avanzi", which I'm fairly sure means "Do you think I'm standing in this cold water and tooting my whistle at you for no reason? Stop taking photos and move along before I arrest you!"

It's advisable, however, to use your limited Italian with caution. Otherwise, you may give waiters the false impression that you're fluent in their language. Much to my amusement, that's exactly what happened to Stephane when he used his very basic Italian to ask a question about a dish on the menu. When the waiter launched into a lengthy explanation complete with lots of dramatic hand gestures, my poor husband looked like a startled deer caught in some very bright headlights. Hoping that I would be able to throw him a lifeline, he shot me a desperate look and admitted in English, "I didn't understand anything he said! Did you?" With tears of laughter streaming down my face, I couldn't resist asking, "What do you think? That I suddenly learned Italian by osmosis while you were sleeping?" Even though the waiter switched to impeccable English, I'm fairly sure that he appreciated Stephane's efforts. I know that I did!

Please click here if you would like to see some more photos of the flooding in Venice.