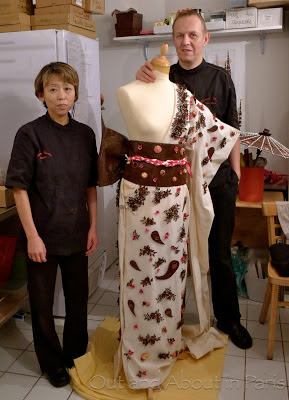 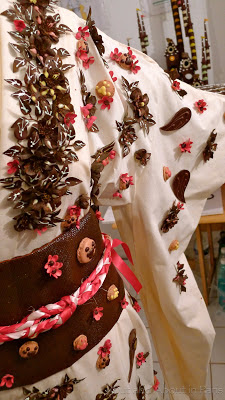 Situated on a quiet, tree-lined street in the 15th arrondissement, the boutique Monsieur Chocolat has been receiving a lot of attention ever since Canadian pop singer Natasha St-Pier decided to wear their creation in the Chocolate Fashion Show. With only one more week to go before the opening night of the Salon du Chocolat, I was grateful that chocolatiers Jean-Marc Rué and Keiko Orihara took some time out from their busy schedule to give me a sneak peek at the magnificent kimono designed to celebrate Asia in the extravaganza, "The New World's of Chocolate".

Trying rather unsuccessfully to ignore the irresistible aroma of cacao wafting through the air, I listened to Mr Rué describe the challenges of creating a dress made out of 60% chocolate as Mme Orihara used white chocolate to meticulously glue the delicate flowers to the sleeve of the kimono. According to Mr. Rué, the secret to making a dress that doesn't melt is to keep the chocolate well-insulated from the skin. He claims to have learned that lesson the hard way when his chocolate chef-d'œuvre started to dissolve during what he says was the worst night of his life in 2005. To keep the kimono intact while Natasha St-Pier waits backstage, Mr. Rue will have to continuously spritz it with a culinary cooling spray.

When asked why they participate in the Chocolate Fashion Show, both Mme Orihara and Mr. Rué smiled with enthusiasm as he explained that they relish the challenge of working with a fashion designer to create a couture masterpiece. Ideally, the artists draw inspiration from one another as they discover ways to overcome the restrictions of each other's craft. As an example, Mr Rue told me that his biggest concern this year is that the chocolate will melt and indelibly stain the cream colored cloth selected by fashion designer Karyne Lauhon. When I replied that it hadn't even occurred to me how difficult it would be to work with white rather than brown fabric, he revealed that this sort of challenge arises when collaborating with artists from other domains. It's the synergy of couture and chocolate, however, that also allows them to produce something truly spectacular.

On the day of the show, hairstylist Fabien Provost will arrange Natasha St-Pier's hair in an updo held in place with chocolate chopsticks. In addition to wearing the elegant kimono with an impressive butterfly bow at the back, the French Canadian singing star will carry a chocolate parasol and fan expertly crafted by Mr. Rué and Mme Orihara.

Thanks to the warm reception that I received by the two chocolatiers at Monsieur Chocolat, I'll be holding my breathe and hoping that their magnificent kimono stays intact during the opening night Chocolate Fashion Show on October 30. From October 31 to November 4, professional models will wear the chocolate dresses during the daily fashion shows at 5:00 pm. 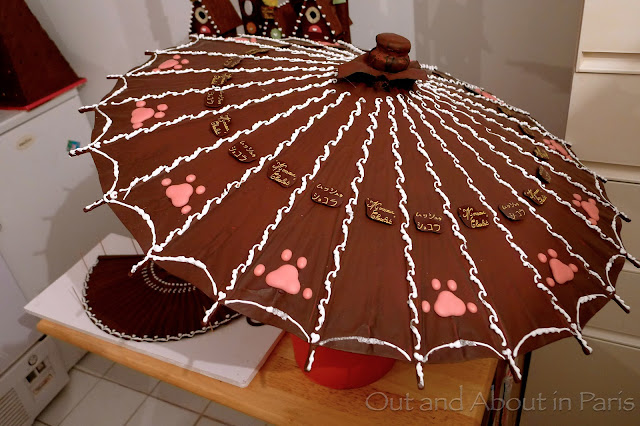