Friendship and tea for ten at the Savoy in London


For more than a quarter of a century, Heidi and I have been friends. We've welcomed each other's children into the world and consoled each other after the deaths of our parents. We've shared our hopes and our dreams, as well as our fears. We've often lived thousands of miles apart but have always felt close to each other. We started out as colleagues and ended up as friends. And it all began with afternoon tea at the Ritz in London.

Heidi's interpretation of the story is that her "crazy American" co-worker forced her to go to the swanky hotel even though she felt that her relaxed weekend attire was too casual for the opulent surroundings. My version is that I wasn't going to let a small matter like a dress code stand in the way of having traditional tea at the spectacular Palm Court. After all, "Nothing ventured, nothing gained" has long been my motto. When the maître d'hôtel graciously granted our request for a table on the condition that Heidi keep her jeans hidden under the tablecloth, we spent an unforgettable Sunday afternoon sipping tea, eating scones and laughing about our adventure as co-conspirators. And that's what we've been doing ever since... 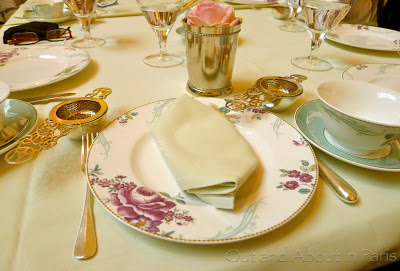 When Heidi recently told me that she had organized a trip to London for her English students, I booked a ticket on the Eurostar so that I could join them for tea at The Savoy on Wednesday afternoon. As the group marveled at the glass cupola of the Thames Foyer while listening to the classical music played by the hotel's resident pianist, Heidi helped everyone decide between the traditional tea with scones and clotted cream or salmon and scrambled eggs. Living up to my reputation as the "crazy American", I not-so-discretely flipped over my plate to confirm that it was Wedgwood china for Joseph the Butler and took lots of photos of the tea stands laden with dainty finger sandwiches and French pastries. Meanwhile, Heidi attempted to maintain some sense of decorum at our table of ten by not hiding her fashionable trousers under the tablecloth.

One of the most important things that I've learned from Heidi is that it's always worth the effort to spend time with friends, especially if there are delectable treats at the end of the journey. And if you ever have the occasion to take the Eurostar from Paris to London for the day, do it! 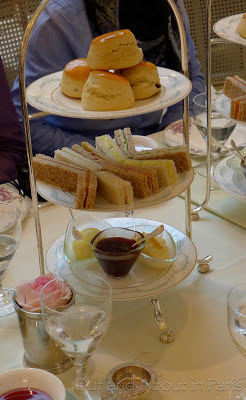 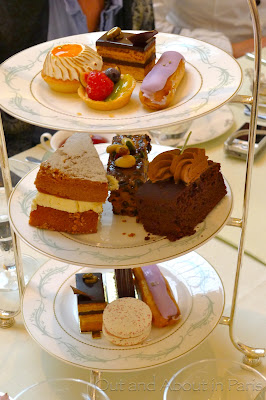