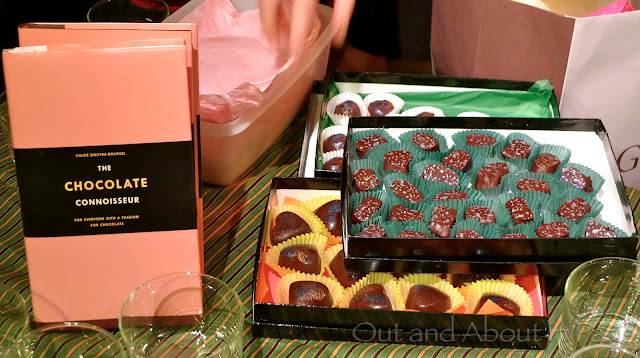 After attending the "Chocolate and Tea Event" at Shakespeare & Company yesterday evening, I dropped a bombshell on Stéphane that shook the very foundation of our marriage. For more than twenty years, our relationship has been built on the belief that he comes from a small European country renowned for its delectable truffles and pralines, while I come from a large country ruled by Mars Bars and Snickers. Needless to say, when Chloe Doutre-Roussel, the author of The Chocolate Connoisseur, declared that the "bean to bar" movement in the United States is producing some of the best chocolate that she has ever tasted, I couldn't wait to rush home and share this earth shattering news with Stéphane. The world as we knew it had ceased to exist!

Bursting through the front door of our apartment, I breathlessly declared, "The chocolate expert said that one of the main reasons that Swiss chocolate is still considered so important doesn't necessarily have to do with taste. It has to do with history! It's because the Swiss industrialized the production of chocolate with the invention of conching." Stéphane, who's understandably proud of his country's mik chocolate heritage, narrowed his eyes while carefully considering the French author's words. It's alright, I assured him. Chloe also said that the Belgians don't make the best chocolate either.

As Stéphane attempted to digest all of this revolutionary information, I added that most of the French chocolatiers are men, who make masculine chocolate, which probably explains why I don't particularly like Patrick Roger's creations. Raving about the smoothness of the ﻿﻿﻿gâté co﻿mme des filles ("spoiled like girls") ganache that we sampled, I opened a bright pink box filled with sparkly treasures. With his eye firmly fixed on the praline decorated with a walnut, he asked if he could try one of these more feminine chocolates created by Alexandra, the American founder who trained at Corden Bleu in Paris and worked as a pastry cook at Chez Panisse in San Francisco. After popping it in his mouth, the last thing that I heard about chocolate were his sighs of satisfaction.

With the Salon du Chocolat fast approaching at the end of the month, I plan to study The Chocolate Connoisseur  in order to be more fully prepared for the world's largest event dedicated to chocolate. After all, it appears that many Americans are on the cutting edge of this irresistible delicacy and I don't want to be left behind! Chloe Doutre-Roussel also offers chocolate classes and tours in Paris. Please visit her website for additional information.

If you live in the USA, here are some of the American chocolates recommended by Chloe: Rogue Chocolatier in Massachusetts, Ritual Chocolate in Colorado, Dandelion Chocolate in San Francisco, Patric Chocolates in Missouri and Fresco Chocolate in Washington.