The 18th annual Salon du Chocolat opened on a very sweet note in Paris last night when fashion designers and chocolatiers joined forces to transport the wildly enthusiastic audience to the exotic lands of Mexico, Asia, India, Africa, Brazil and into the far reaches of outerspace. Inspired by the theme, "The New World's of Chocolate", there were some exquisite culinary masterpieces, including a Carnival creation with diaphanous wings sprinkled with chocolate truffles, a Mayan costume adorned with gold leaf chocolate medallions and a finely detailed kimono sprinkled with delicate chocolate flowers.


While the aroma of chocolate wafted enticingly through the air, celebrity models strutted their stuff on the runway and students of the Académie Internationale de Comédie Musicale performed dance routines to introduce each of the featured countries. As promised, the show finished with a spectacular climax, a rousing performance of "Give Me More" by English songwriter and vocalist Tara McDonald. If you think that sashaying around on stage is hard, try singing a steamy song in a dress that is made out of chocolate!

Visitors to the Salon du Chocolat are invited to watch the dazzling Chocolate Fashion Show daily at 5:00 pm. Seating is on a first-come, first-served basis so be sure to grab a spot as early as possible. Not surprisingly, there's a big demand for seats because everyone wants to see this show! The chocolate dresses are on display in the hall both before and after they appear on the catwalk. It's a great opportunity to study the details and to take photos. 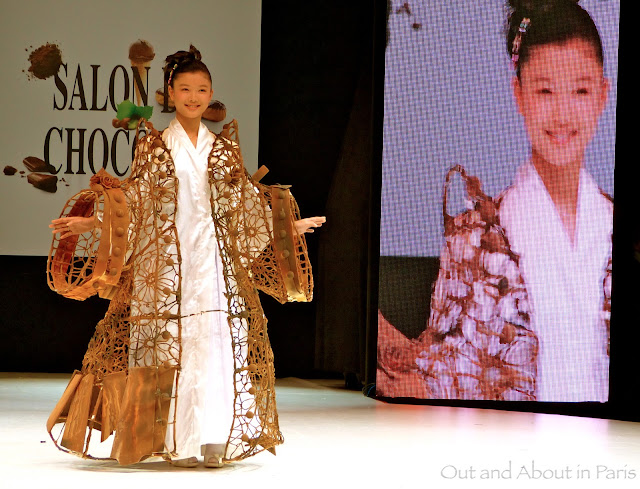