"Hope Springs" and "How the French Invented Love"

"Who in here is not having sex?"

Kay [referring to her non-existent sex life with her husband]: He is everything. But I'm... I'm really lonely. And to be with someone, when you're not really with him can... it's... I think I might be less lonely... alone. (From the movie "Hope Springs")

While watching the recently released Meryl Streep movie about a middle-aged couple who go to an intensive week long marriage counseling session in a small town in Maine because they've grown apart and are sleeping in separate bedrooms, I felt like an anthropologist "fly on the wall" observing the audience's reaction to every day life in the United States. When the Parisians chuckled at the sight of Streep's character, Kay, preparing what appeared to be exactly the same strip of bacon and egg day after day for her husband, played by Tommy Lee Jones, I could feel them thinking that Kay and Arnold's marriage would have been better if they started their day with croissants and coffee. From the thoughtful silences that accompanied Kay and Arnold's emotional discussions with therapist Dr. Feld, brilliantly portrayed by Steve Carrell, it was obvious that there are marriages on both sides of the Atlantic that are devoid of intimacy and passion. But it's only after Kay and Arnold, huddled on opposite ends of the couch in Dr. Feld's office, reveal that they haven't had sex in the missionary or any other position for more than five years that I noticed some of the French people shaking their heads in stunned disbelief.

Grateful that Stéphane and I watched "Hope Springs" together but wishing that I would have had the opportunity to see it with a French friend with whom I could analyse the cultural differences, I was thankful to receive a tweet from BostonZest calling my attention to Pamela Druckermann's book review of "How the French Invented Love" in the Wall Street Journal because the second paragraph perfectly explains why the Parisians were shocked: In France, Ms. Yalom concludes, sexual desire isn't optional. "A Frenchman or woman without desire is considered defective, like someone missing the sense of taste or smell," she explains. And where we Americans expect adults to control their urges, the French treat passion as "an irresistible fate against which it is useless to rebel."

Walking home from the cinema, Stéphane and I both said that we mistakenly thought that "Hope Springs" would be a light-hearted comedy. It's not. It's a touching true-to-life portrayal of how people can grow apart and unintentionally hurt the ones they love. It's also a reminder that good marriages require work, lots of it. The article about "How the French Invented Love" adds an interesting new dimension to the film, one that I look forward to discussing with Stéphane when we're together in Venice this weekend. Thanks to a transportation strike, he's currently stuck in a plane sitting on the runway at Paris Orly Airport. Ahh, the French. You've gotta love them! 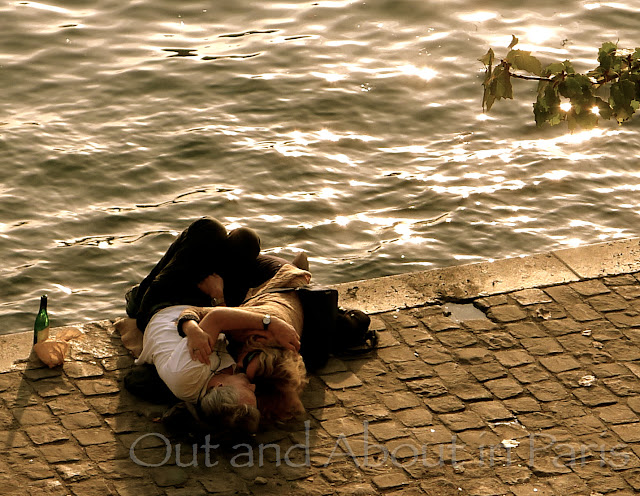