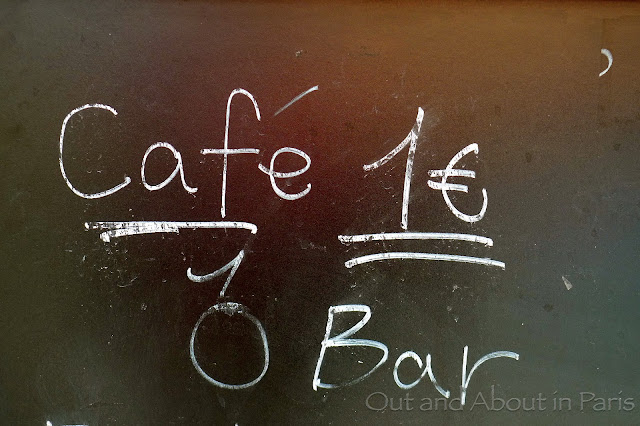 Whew, I'm wired to the max! After an exciting morning at a "By Terry" make-up workshop organized by "Meeting the French", I decided to do some investigative reporting to verify the claim made on the official website of the Marie de Paris that local contributors have identified 70 Parisian cafés serving coffee for 1€ or less. 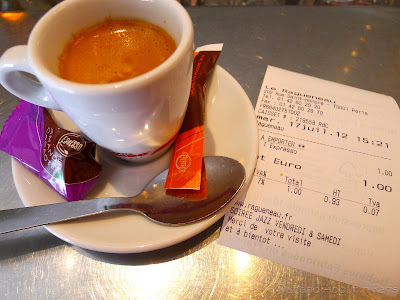 Being rather skeptical since I always pay more than double that price, I looked at the map to determine which cafés are located near the "By Terry" boutique and started with Le Ragueneau at 202 rue Saint-Honoré. As the price of drinks changes according to where you sit in an establishment, I went straight to the bar and ordered a coffee. Much to my surprise it arrived with a chocolate covered almond, a packet of sugar and a bill for 1€. So far, so good. Not only is the coffee less expensive if you stand at the bar, but I had the added pleasure of chatting with one of the friendly waiters while he converted boiling hot tea to ice tea for another customer. His secret recipe included a dash of lemon syrup.

If you're a fan of jazz, I also learned that Le Ragueneau hosts concerts by the Clement Blumen Trio on Friday and Saturday nights. 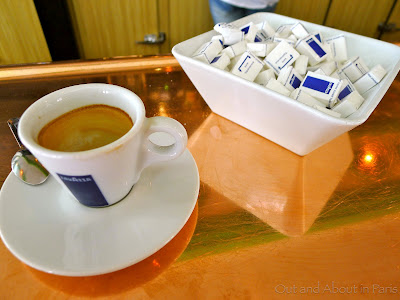 Next on the list was Café Pistache located at 9 rue des petits champs, where my request for a coffee once again worked like a charm. It arrived steaming hot with sugar on the side but no chocolate covered almond. Looking around at all of the tourists sitting at the tables, I felt like telling them that they should join me at the counter but understood that there are times when the need to take a load off one's feet far outweighs the savings made by standing at the bar. 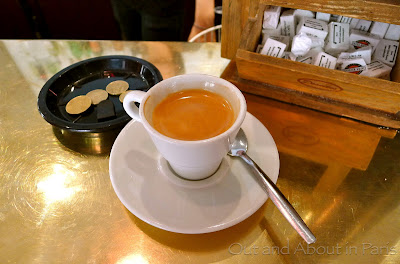 Arriving at what I thought was my third and final destination, I felt a certain reluctance to go inside because there were a lot of single men standing at the bar drinking beer along with a lone Japanese woman and her dog. But in the end, Le Ventadour at 46 rue des petits champs turned out to be a novel experience because I ended up talking with the charming barrista and a Parisian man, who asked if I was married and if my husband was with me in Paris. If I was looking for confirmation that I came out of the "By Terry" make-up workshop looking better than when I went in, this was it. Or, perhaps it was the beer talking!

As it turns out, I get to submit Le Ventadour's name to the official list of places selling coffee for 1€ or less because I mistakenly visited the wrong café on the rue des petits champs. Click here to see the map with all of the addresses or to make a contribution to the list. The Marie de Paris is thinking about developing an app that includes all of the cafés and needs your input to ensure that the information is accurate and up-to-date.