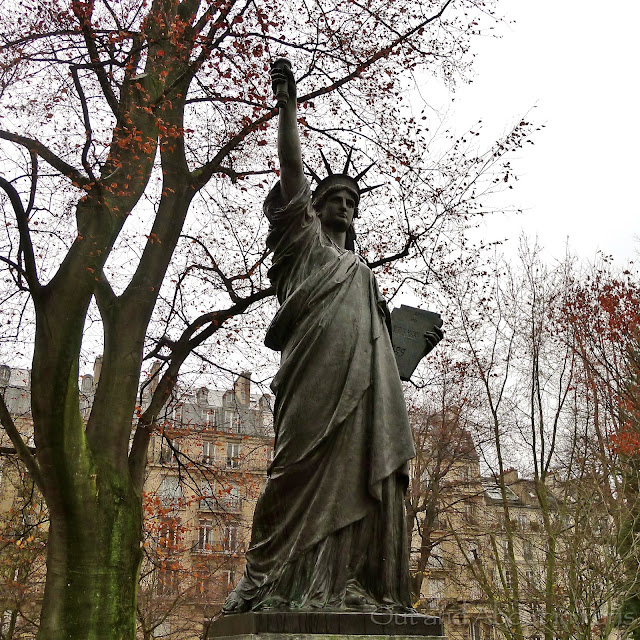 If you're planning a July 4th trip to New York City to see Lady Liberty, don't worry! She's still there. But if you're planning to visit her little sister in the Luxembourg Garden in Paris, you'll have to change your plans and go the d'Orsay Museum, which is where she has taken up residence for the foreseeable future.

After posting photos of the different Statues of Liberty that I had found in various locations around Paris and posing the question, "How many Statues of Liberty are there?" last December, readers with an impressive knowledge of the city told me to make haste and go to the Luxembourg Gardens. So, I did -  only to discover that someone had stolen Lady Liberty's torch, making it a fairly dire situation for a statue that is supposed to enlighten the world. Fortunately, the American Friends of the d'Orsay Museum had already started raising funds to restore the sculpture, which had been exposed to years of pollution, weather elements, and recent vandalism. But before they could move her, the French Senate had to vote on her relocation because they had ordered the smaller bronze version of Liberty to be cast in 1889 to honor the Centennial of the French Revolution and the 9-feet tall statue has stood in the Luxembourg Gardens, the home of the French Senate, for over 100 years.

Whatever your nationality, Lady Liberty's message is as vital today as it was when she was first designed by Frédéric Bartholdi in the early 1870s. Inscribed upon her tablet is "July 4, 1776", the date of the United States Declaration of Independence, which proclaims:

We hold these truths to be self-evident, that all men are created equal, that they are endowed by their Creator with certain unalienable Rights, that among these are Life, Liberty and the pursuit of Happiness.