A little slice of life in Paris - overheard at the market 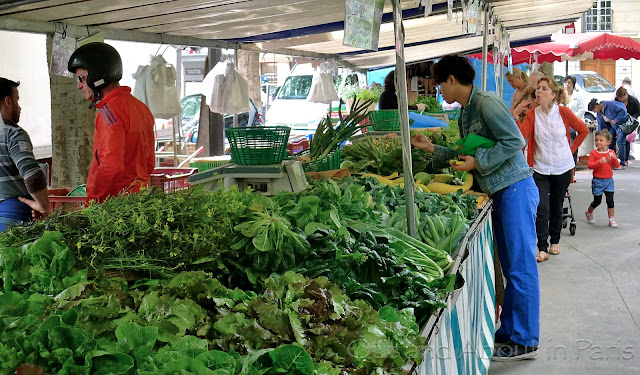 Back in February, I wrote a post about the law banning "mademoiselle" ("miss") from official government forms in France. Other than reading a couple of articles about the new regulation, I hadn't heard much about it until I went to the market this morning. While standing in line waiting to pay for my fresh vegetables, I was delighted to overhear the following conversation:

Man in motorcycle helmet: Here you are, Madame. (Joking) Oh, excuse me. I mean mademoiselle.
Woman (who turned out to be the man's sister-in-law): You're not allowed to call me mademoiselle!
Man: What? Why not?
Woman customer #1: It's against the law. The government said that all women are to be called "Madame".
Man in motorcycle helmet (astonished): But that's ridiculous! I'm supposed to call a beautiful young woman Madame?
Woman customer #1: That's what the government decided. It's to prevent harassment.
Man in motorcycle helmet: Harassment? That's stupid. We're not living in the United States! (Speaking to a young boy) You're going to have a hard time when you grow up! You won't even be able to look at a beautiful woman without being accused of harassment. Well, maybe you can still look if you're discrete. (General laughter by everyone, including the women)
Woman customer #2: Or if you're wearing sunglasses! (More laughter)

Parisians love witty banter and there's no place where it's more evident than at the neighborhood markets. Click here to see an interactive map and find one near you. There's also a handy app called "Paris Food Markets" that lists markets by arrondissements.