Bastille Day 2012 - the military parade, Hotel George V and what I learned about Stéphane 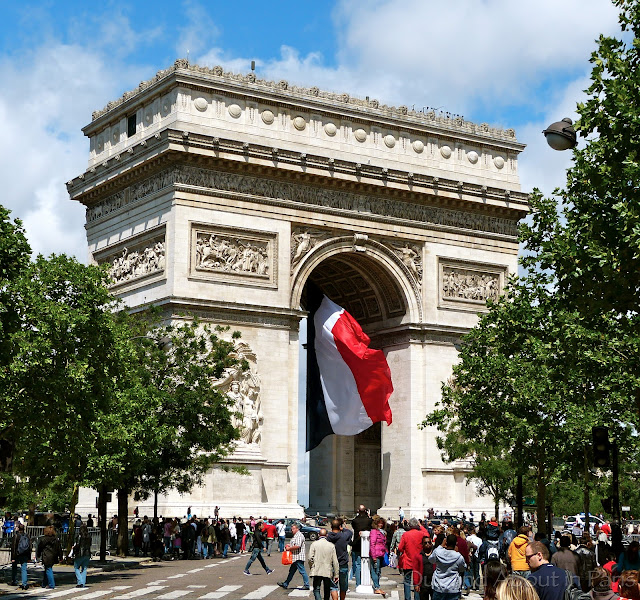 It sounds like the title of a high-budget action film starring Bruce Willis, Matt Damon and Sylvester Stallone, doesn't it? Even though it's not a glitzy movie with amazing special effects, there were definitely all of the right components on the Champs-Élysées on Saturday morning: snipers on top of Louis Vuitton and other buildings, security check-points, military vehicles, helicopters, planes, a huge crowd of people from around the world and lots of high value targets.

Just getting to the parade was a challenge because most of the metro stations in the secure area were closed, so Stéphane and I found ourselves wandering through the Etoile metro station along with hundreds of other people trying to find the one exit that was open. When we finally emerged from the bowels of the earth, we discovered that the majority of the roads were barricaded. Snaking our way through the side streets, we located one that had access to the Champs-Élysées and ran smack dab into this: 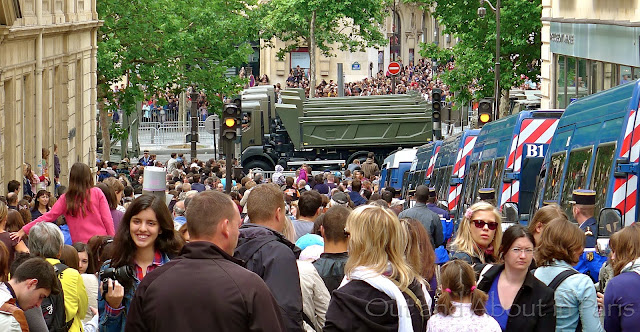 Realizing that it was a mistake to have slept so late after going to the Firemen's Ball on Friday night, we maneuvered our way to the main road and were caught in a bottle neck of people. A woman was crying, people were pushing and starting to panic, a man got sick. Seeing that there was no way forward or backward, Stephane and I followed a group of young people and jumped over one of the barricades into a secure area along the Champs-Élysées. Amazingly enough, the policemen controlling the entrance either didn't notice us or decided that we looked harmless enough because they didn't kick us out. Much to our relief, we could watch the rest of the parade with some room to breath.

A word to the wise, if you want to see the military parade on the Champs-Élysées on Bastille Day -- get there early! 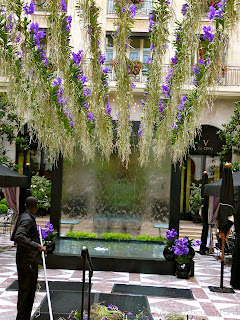 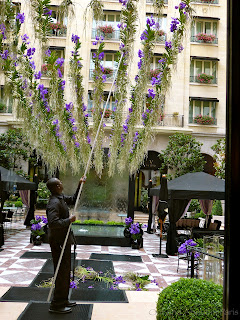 After our all too close encounter with the panicked masses, I suggested that we seek sanctuary at the nearby George V. With a destination in mind, Stéphane and I used the underground tunnel to cross the barricaded avenue and tried not to act overly excited by the hanging orchids decorating the courtyard. Knowing that some of the luxury hotels in Paris like to keep out the riff raff like us (that never happens to Matt Damon!) so that there's always an empty table available for their guests, we nonetheless managed to secure a spot by deftly avoiding the hostess' question about our room number.

Sitting at the bar has proven to be a good strategy in the past and it didn't disappoint us this time. Not only did the head bartender share some helpful tips for next year, he also supplied me with extra gourmandises to go with my coffee. According to him, the Champs-Élysées is not as crowded near the Place de la Concorde as it is near Etoile. He also told us that guests of the George V can watch the fireworks from the roof of the hotel and that they occasionally organize a dinner cruise along the Seine on the 14th of July. That bit of information prompted Stephane to call Yachts de Paris to ask if they were offering a Bastille Day dinner cruise. They were - for 345 euros! Our next burst of inspiration was Les Ombres, the restaurant on top of the Quai Branley with a stunning view of the Eiffel Tower, but they were closed for the entire evening because of their location inside the secure perimeter.

If you saw yesterday's post, you already know the conclusion of the story and that we ended up watching the fireworks from the best spot in Paris - the Champ de Mars.

Here are some more photos of the military parade. I don't expect to take any pictures next year because I learned something new about my husband - after completing the obligatory military service in Switzerland, he's not at all interested in seeing military vehicles and people in uniform. I wonder why he didn't tell me that before we left home on Saturday morning! 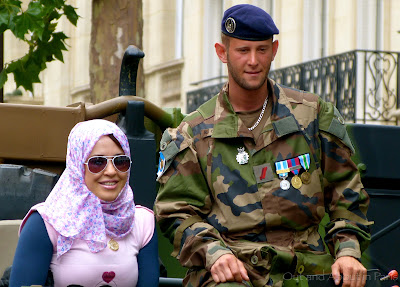 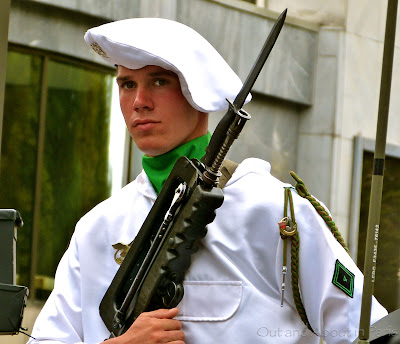