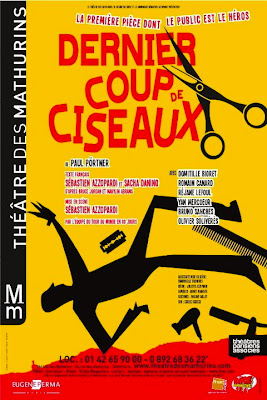 Are you in Paris? Do you understand French? Are you looking for an entertaining way to spend the evening?

If you answered "yes", GO see "Dernier Coup de Ciseaux", the uproarious whodunit comedy where the audience helps solve the crime - I promise that you won't regret it!

Adapted from "Shear Madness", an American play seen by over 9 million people around the world, the spectacle is a delightful mixture of improvisation and up-to-the-minute humor set in a hairstyling salon in the Marais. After being thoroughly delighted by the original version in Boston, Stéphane and I couldn't wait for the opportunity to repeat the experience and were pleased when a visit from our niece and her boyfriend provided us the perfect excuse to go to the theatre on Saturday evening.


Not only did we have a wonderful time, but I learned something new about Parisians. They're spontaneous, witty and funny. Since I don't want to give away too much about the performance, let's just say that audience participation is completely optional but that there were a surprisingly large number of wannabe detectives whose interactions with the cast members were hilarious.

Due to its overwhelming success, "Dernier Coupe de Ciseaux" has been prolonged at Théâtre des Mathurins until the end of the year. It has received an 84% "Bravo" rating from 859 spectators. Click here to read the reviews in French. 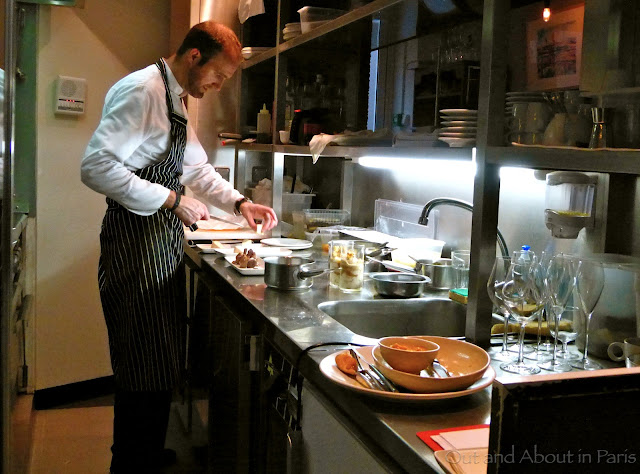 After the show, we strolled across the Seine to have dinner at FL Restaurant, which is currently the number one restaurant in Paris out of 8,056 listed on Trip Advisor. Working in an open kitchen visible from the cozy dining room, the young Picardian chef artistically prepares and plates each dish. Reasonably priced, FL Restaurant is a very good option for dinner, especially since it's located on a small street near the Eiffel Tower. Walking under the sparkling structure on our way home was a splendid way to end our Saturday night out in Paris.