Wondering how they make the famous blue porcelain of Sévres? Join me for a behind-the-scenes tour of the factory. 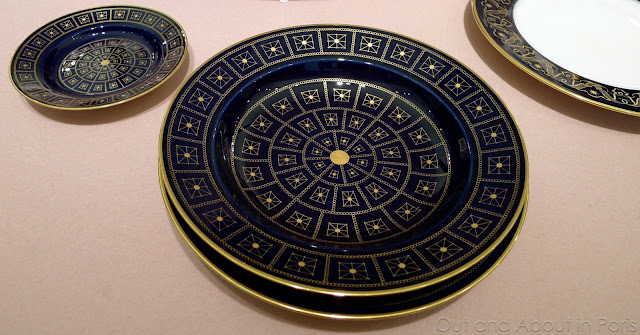 After jotting down lots of facts during my visit to Sévres - Cité de la Céramique, the one that remains foremost in my mind is that the factory, which rose to pre-eminence under the patronage of King Louis XV and madame de Pompadour, supplies all of the French Embassies and Consulates with their distinctive porcelain. So, if you clumsily break a bread plate while dining with Mme L'Ambassadeur Bermann in Beijing, no problem. Someone on her staff will contact the porcelain factory in Sévres, where their extensive library contains records of all of the different patterns, and they will produce a new one. While all of the pieces are handcrafted, those with a blue background, painting and gilding require more time because they are fired at least eight times, at both high and low temperatures.

Want to know more? Then join me on this photo tour of the workshops. Please click on any of the pictures that you would like to enlarge. 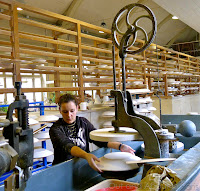 Porcelain is made from kaolin (from other parts of Europe because the supply in France has been depleted), feldspar (Finland and Norway) and quartz (France). It's "memory" is stronger than that of regular clay which makes working with porcelain more difficult.

Each of the 130 state ceramicists are trained for three years at an in-house training center. 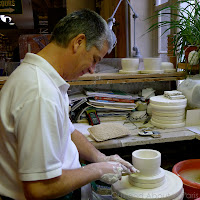 They are based in 27 workshops and produce several thousand pieces each year.

When asked if his work dries his hands, this ceramicist said that it's the water that does the damage. He reminded us that clay is used for facial masques, etc. and is good for the skin. 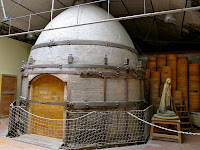 One of the six bottle kilns from the 19th century. Even though they are only used for exceptional firings, the two-story high kilns are classified as national monuments and may not be destroyed.

If you look closely, you'll see a porcelain statue next to the kiln. Most unexpectedly, there were many such pieces to be seen throughout the factory. 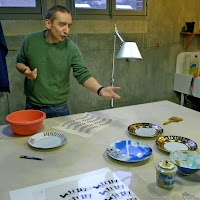 This craftsman explained the complicated process of lithography and the application of 24-carat gold that is reduced to a powder at the laboratory before being applied to the porcelain with a paint brush. All of the leftover gold is meticulously collected and re-used. 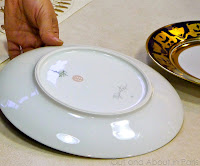 Marks on Sévres porcelain indicate when the piece has been shaped and decorated, the kind of paste and the workers. Signatures of contemporary artists also appear. 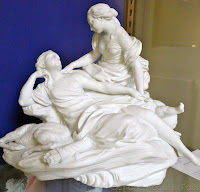 In addition to being famous for its distinctive porcelain with a blue background, Sévres is also known for its statues in unglazed porcelain, called biscuits. These were first produced at the workshop in Vincennes before it was moved to Sévres in 1756 to be in closer proximity to the royal palaces.

Wondering about the price of the bread plate that you broke in Beijing? A mere 210 Euros. If you would like to start your own collection, porcelain may be purchased at the boutique in Sévres or in Paris at 4, place Andre-Malraux, 75001 Paris.

The Sévres - Cité de la Céramique compound houses the factory and the National Porcelain Museum, which I plan to visit another time. Many thanks to Véronique Kurtz, the Art History Director of WICE, for organizing the tour of the workshops. As always, it was excellent! 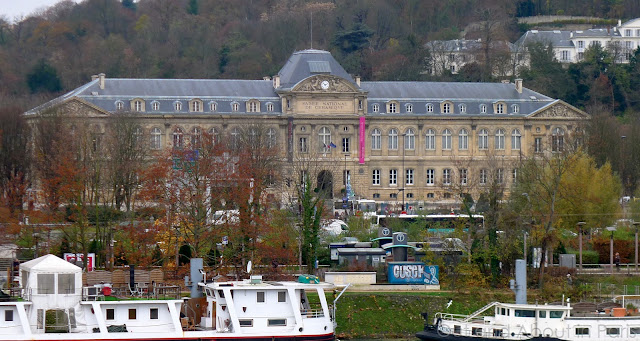