You know that moment when you're seated next to a stranger on an airplane and they try to initiate a conversation by asking what you do? Well, I've found that the most effective way to curtail any further discussion is to tell them the truth. As soon as they hear that I don't work, they suddenly become engrossed in their book because they're sure that they're seated next to the world's most boring person. Trust me, it's a real conversation stopper.

Just for the fun of it, I may change my answer the next time that I'm flying across the Atlantic and respond that my job is to figure things out. Doesn't that sound mysterious and interesting? But it's true - that's what expats do. We move from country to country and try to figure out how to make our new life resemble our old one. And it's never more evident than at Christmas time when it's impossible to duplicate all of our beloved traditions in a foreign land.

As I mentioned in an earlier post, one of our biggest dilemmas was the question of the tree and what to use for ornaments since all of ours are rather unwisely stored in the United States. Fortunately, I remembered the vendors selling the counterfeit Eiffel Tower keychains from China and made an illegal immigrant's day by purchasing a large portion of his supply. At first, he seemed to think that I was going to enter the lucrative trinket selling business myself and was relieved when I explained that they were for our Christmas tree. 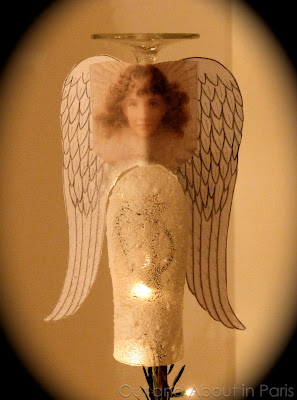 Next on the list - a tree, lights and more ornaments. I won't go into all of the ugly details but will say that there were crowds of people, moments when I was close to tears at the thought of our Christmas failure, and finally success! Sure, the tree seemed to shrink when we got it home and Stephane had to drill holes to insert additional branches to cover the huge gaps, but it looks beautiful -- as do all Christmas trees. And best of all, take a look at our angel. Since the stores that we visited were completely sold out of tree toppers, we made one out of an inverted campagne flute, added some wings and a face (I suggested using my photo but Stephane nixed that idea), and sprayed it with artificial snow. Step aside Martha Stewart!

Next up: Figuring out the Bûche de Noël.

Joseph, Even though we would have liked to wait for our children to decorate the tree, we decided that we wouldn't this year because of how late they arrive. We did, however, get two special ornaments for them to put on the tree.