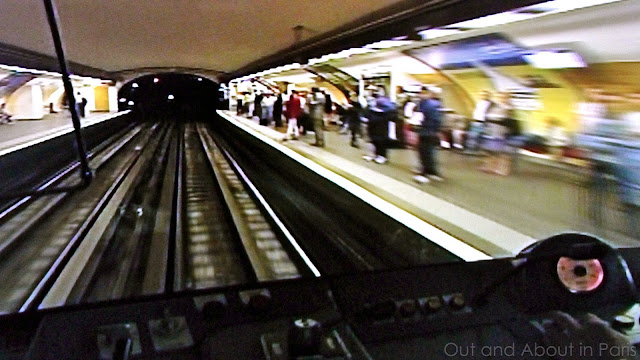 Feeling frustrated that I still don't have my French driver's license and missing the excitement of being behind the wheel, I commandeered the controls of a metro train on Sunday afternoon. Since I've spent the last nine months listening to the Parisian passengers criticize the drivers for stopping abruptly or taking a curve too fast, I felt up to the task.

Leaving the station at the brisk pace of 10 kilometers (6 miles) per hour, the alarm suddenly sounded. Darn! While I know that it may seem as if I had neglected to shut the doors, I was actually being considerate of the passengers' comfort. I wanted them to have some extra air circulation because it can get stuffy with all of those warm bodies jammed together. But since rules are rules, I pushed the button to close the doors and rammed the throttle forward. Whizzing through the tunnel to make up for lost time, another alarm went off when I flew past a tiny red light that was barely visible to human eyes. Hearing sniggers, I looked behind me at the group of kids laughing at my ineptitude and waiting for their chance to drive the simplified simulator at the current exposition on the metro at the Musée des Arts et Métiers. Challenging them to do better than me, an experienced driver, I stepped aside and prepared to laugh. Much to my surprise, I have to admit that riding the metro would probably be more comfortable if 8 and 9 year olds were at the controls because they did a great job. It must be all of those video games that they play! 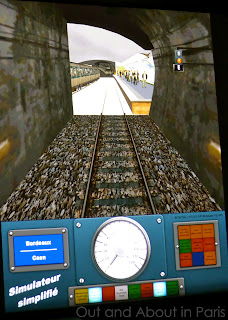 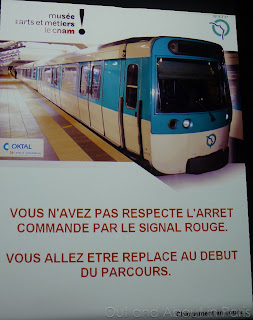 My short lived career as a metro driver ended in shame - "You did not respect the stop commanded by the red light. You will be replaced at the beginning of the course."

While Stéphane was busy reading panel after panel about the construction of the metro (have I mentioned that he's an engineer?), I jotted down some interesting facts:

The panels for the expo are in French but there are laminated cards with translations in English at the information desk.