Let me just start this post by saying that my intentions are occasionally misguided, like when I saw some tweets Wednesday morning saying that Rupert Everett would be the guest of honor at the unveiling of Oscar Wilde's newly cleaned tombstone. My thoughts, as I hurriedly got dressed and dashed to the metro, were of Everett singing "I'll Say a Little Prayer for You" to Julia Roberts in "My Best Friend's Wedding" and of how pleased my daughter would be if I was able to see the British actor and not at all about the momentous ceremony marking the 111th anniversary of the Dublin playwright's death.

Since no one on Twitter seemed to be clear about the exact timing, I rushed to the information office at Pere Lachaise cemetery and almost slammed into some French photographers asking for the location of Wilde's grave. Upon learning that the ceremony was due to start in fifteen minutes on the opposite side of the cemetery, I set off at a rapid pace hoping that I wouldn't get lost in the maze of graves like I normally do. But luck was with me because I arrived, huffing and puffing, just in time to see Rupert Everett talking with a small group of reporters. Whipping out my notebook, I headed over to hear what he had to say.


Everett, who openly declared his homosexuality in 1989, is a passionate and eloquent spokesman for Oscar Wilde, the Irish writer and poet who was imprisoned in London for two years and reviled for his "gross indecency" with other men. Explaining that Wilde has long been a role model and inspiration to him, Everett said that he hopes that fans will respect the newly cleaned tombstone that was previously covered with pink and red lipstick kisses left by ardent admirers. While admitting that Wilde may have been amused because he liked attention, Everett added that he would have probably preferred for his tomb to be clean and beautiful because he loved perfect clothes and perfect houses. 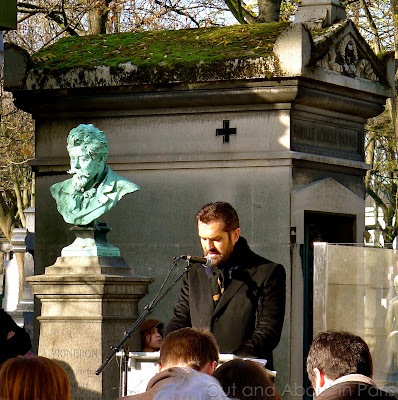 After addressing the crowd briefly in French, Everett switched to English to read a passage from "De Profundis," the letter Wilde wrote to lover Alfred Douglas while imprisoned in England. Everett, who referred to the author as his patron saint, has acted in several Oscar Wilde plays and the screen adaptation of "The Importance of Being Earnest" and will portray Wilde in an upcoming film. It's a movie that I look forward to seeing. Not because it will star Rupert Everett but because it will tell the tragic tale of a man who rose so high and then sunk so low.

In the final years of his life, Oscar Wilde spent his days as a flâneur, wandering the boulevards of Paris on his own. He was spat upon by English people vacationing in the French capital and died destitute at the age of 46.

When asked about his experiences versus those of Wilde, Everett pointed out that it's still difficult to be openly gay, particularly for a sports person or a young movie star, even though political correctness may lead one to believe otherwise.

If leaving your mark on Oscar Wilde's grave is still on your list of things to do while in Paris, please kiss the glass and not the tomb because lipstick degrades the stone. Let's show the author's tomb the respect it deserves. 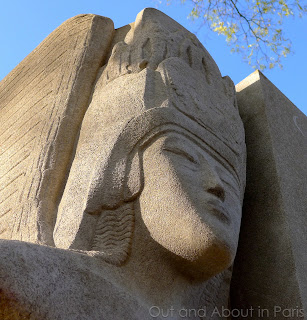 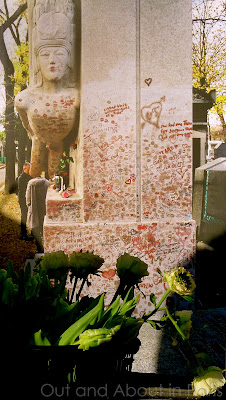