As I’ve said before, I’m usually a cheap date but things may change now that I've discovered that George V’s afternoon tea rivals any of those that I’ve had in London. It's so good that I’m already thinking about ways to win the lottery so that I won’t have to wait another year to use our wedding anniversary as an excuse to return.

After making an exploratory visit last weekend when I was somewhat disappointingly seated at a table in the bar, we followed the suggestions of the hostess to increase our chances of getting a table next to the pianist in La Galerie, the room described as the heart and soul of the George V. As only guests staying in the hotel may reserve tables, seating is on a first-come, first-serve basis and is in high demand. Stephane, Sara and I agreed, however, that arriving shortly after 3:00 p.m. and waiting forty-five minutes for the perfect table isn’t too bad when you're in a prime location for people watching. Our table was ready before we knew it!

Wanting to toast our many years together, Stephane and I took the French Tea (55€) that came with a glass of champagne (bien sûr!), while Sara opted for the English Tea (45€).

While Stephane and I raved about our pumpkin soup with chestnuts, foie gras with mango chutney, crab with quinoa and scallops tartare, Sara was pleased by the more traditional fare of tuna salad, cucumber salad, roast beef and smoked salmon. With macarons, Financiers (small French cakes), fruit salad, and some dessert that I don't remember, many of the pastries were the same for the English and French tea. Perhaps best of all were the scones with clotted cream because I would have thought it necessary to cross The English Channel to find ones that tasted as delicious. Sara, who is a bit of an afternoon tea aficionado, remarked that the only difference between the George V and Number Sixteen, where she recently had tea while visting friends in London, is that we weren't offered milk and additional hot water to dilute our tea. I guess that, unlike in England, tea still doesn't take center stage in France.

Not wanting to leave the festive atmosphere of the George V, we did some window shopping at one of the boutiques and found a little trinket for Stephane to put under the Christmas tree. At 194,470 € ($253,608), the necklace made our afternoon tea seem like a real bargain. Maybe I am a cheap date, after all! 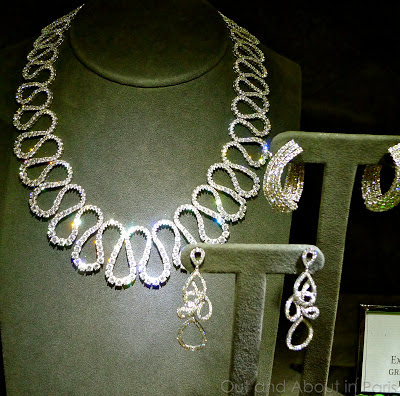