How many Statues of Liberty are there in Paris?


If you would have asked me how many statues of Lady Liberty there are in Paris before I moved here, I hope that I would have remembered the one located on the Ile aux Cignes near the Pont de Grenelle. In fact, she's one of the main reasons why I took our apartment because her alignment with the Eiffel Tower as viewed from our balcony serves as a metaphor for my life. We have an immediate bond, a kinship, because we're both Americans in Paris.


So, it came as a bit of a surprise to come across another bronze statue of her in front of the Musée des Arts et Métiers and to realize that "my" Lady Liberty isn't alone. It turns out that she has an entire posse of friends - or clones of varying sizes - in some surprising locations around the city. 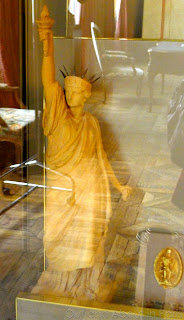 Here she is stuck in a display case, along with official certificates signed by the newly elected presidents of France, such as Chirac, Mitterand and Sarkozy, when the mayor of Paris received them at the Hôtel de Ville (Town Hall) immediately after the presidential elections. Lady Liberty has friends in high places and hangs out with an impressive crowd. 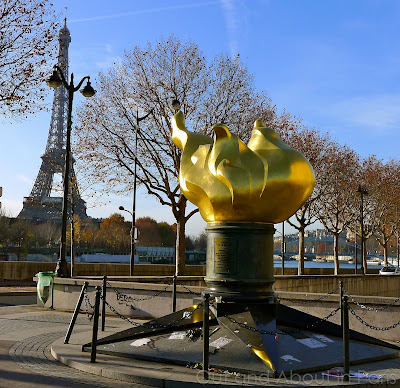 And here's an exact replica of Lady Liberty's gilded torch, the Flame of Liberty, that is located near the Pont de l'Alma. In 1989, it was given to the city by the International Herald Tribune to celebrate its 100th anniversary (1887-1987) of publishing an English-language daily newspaper in Paris. More importantly, the flame also symbolizes the long-lasting friendship between France and the United States. It is, however, more frequently thought of as the unofficial memorial for Diana, Princess of Wales. who died in the tunnel beneath the Pont de l'Alma in 1997.

I'll save the story of the statue's construction for another day. In the meantime, I'm off to figure out how to bid online for the Hermes scarf with a Statue of Liberty motif that will be auctioned in Chicago this weekend. Many thanks to Joseph for finding something that I just can't resist. After all, Lady Liberty is my kindred spirit!