No doubt about it - I have to go back to the Pantheon!

Have you ever heard of a clandestine group called the Untergunther whose mission it is "to restore the neglected cultural heritage in Paris"? I hadn't either until Christine, prompted by last Thursday's post on the view from the dome of the Pantheon, sent me an email about a British television program called Greatest Cities of the World. The Paris episode featured a secretive group of do-gooders who snuck in to the Pantheon to repair an antique clock that had stopped working in the 1960s. Under the very noses of the security guards, they stealthily set up a secret workshop in a rarely used section of the monument's dome and devoted a year of their time to restoring the Wagner nineteenth century clock to working order.

Intrigue, history and a happy ending all rolled into one - I'll be sure to let you know as soon as I have the opportunity to see this monumental timepiece. 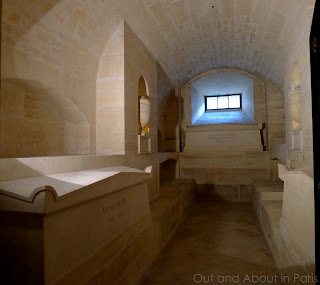 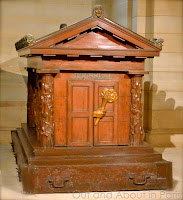 Tombs of Victor Hugo, Alexander Dumas and Emile Zola. Tomb of Jean-Jacques Rousseau in the crypt in the Pantheon. "The Great Rousseau", who is considered to be one of France's greatest authors and philosophers, was born in Geneva and lived for a time in Vevey. Throughout his life, he always identified himself as a citizen of Geneva.
Originally built as a church dedicated to Saint Genevieve, the Pantheon now serves as the final resting place for many of France's great men and a couple of its women, including Victor Hugo, Emile Zola, Voltaire, Rousseau, Marie Sklodowska-Curie, Louis Braille, Jean Moulin and Jean Jaures. While walking through the crypt and overhearing the French parents explaining the significance of the building to their children, Stephane and I tried to think of a similar mausoleum honoring the great men of another country. We couldn't. Can you?
Not only is the Pantheon a mausoleum for the great men of France, but it is also where French physicist Leon Foucault suspended a 62 pound (28kg) brass coated lead bob from the ceiling of the dome and conducted his experiments to create a simple device that demonstrates the rotation of the earth.

Many thanks to Christine for telling me about the Untergunther. Click HERE to read a very interesting article in The Guardian with more details about the clandestine group. And thanks to Tom for emailing a photo of the interior of the dome of the Wisconsin State Capitol. Your comments and emails make blogging much more interesting!
Pantheon
Place du Pantheon
75005 Paris
Labels: national monument Pantheon Unthergunther