Thanks to lunch at Les Bouquinistes, my relationship with Paris is still in its honeymoon stage! 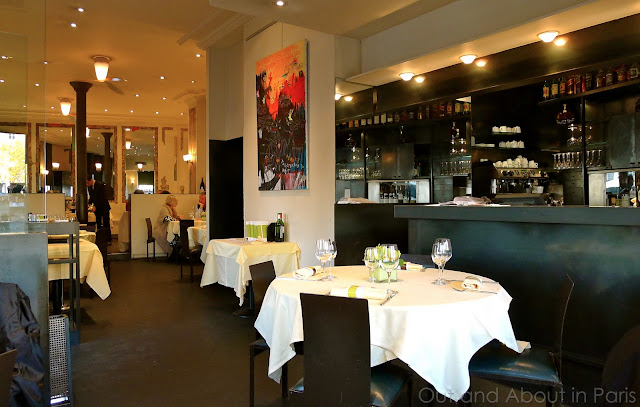 After a string of sleepless nights due to our noisy neighbors, whose nocturnal habits are starting to make us think that we're living under a family of vampires, and a frustrating visit to the bureau of motor vehicles, where a petty bureaucrat found one reason after another to deny the applications for our French driver's licenses, Stéphane and I were sure that the honeymoon stage of our relationship with Paris had come to an abrupt end.

Grumbling about wasted mornings and rigid French rules, we made our way to Les Bouquinistes, a Guy Savoy restaurant, and bemoaned our fate. Gone were the rose-tinted glasses with which we had lovingly viewed the city and all of its inhabitants as we felt ourselves rapidly approaching the next stage of culture shock - rejection of the country in which we live.

As it was already past lunchtime, we decided to have something to eat before completely renouncing all things French and quickly settled on the three-course Menu du Marché with a glass of wine for 31 €. While sipping my Sauvignon Blanc and gazing at the outdoor booksellers next to the Seine, I started to feel something akin to affection for Paris. Reminding myself that I still didn't have a French driver's license, I steeled my resolve to resist her charms.


I would have succeeded if our lunch wouldn't have been so delicious from start to finish and if the service had not been so aimable and professional. Admittedly, there was a slight problem when one of the servers dropped a sauce spoon on the tablecloth during the second course, but they quickly moved us to another table with a better view. And to seal our fate, we were told that our meal was on the  house when we asked for the bill. As we left with smiles on our faces, our servers said that they hoped that we would return to Les Bouquinistes. We certainly will - it's the perfect place to go for lunch whether you're in love with Paris or not.
Les Bouquinistes
53 Quai des grands Augustins
75006 Paris