The excitement in the air was palpable last night as a crowd of several hundred people waited for Karl Lagerfeld, fashion designer and creative director for the fashion house Chanel, and Vanessa Paradis, the French singer, actress, and long-time companion of American movie star Johnny Depp, to unveil the Chanel-themed Christmas windows at Printemps. Throngs of excited people overflowed into the street, while the notoriously impatient French drivers tried to solve the traffic jam by toot-tooting their horns on Boulevard Hausmann. 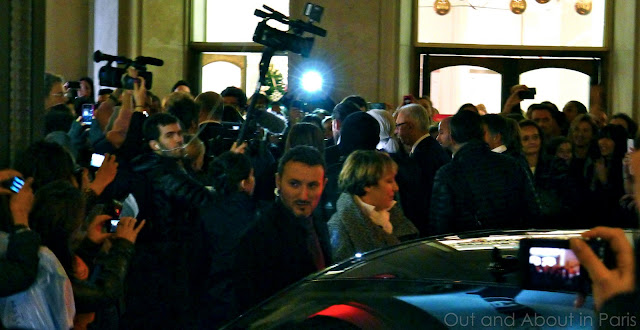 Lagerfeld and Paradis are in that throng of people somewhere!
The fleeting glimpse of Lagerfeld's distinctive white ponytail in the photo above was
about as close as I thought that I would get to the stars of the evening... 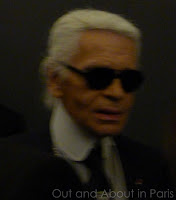 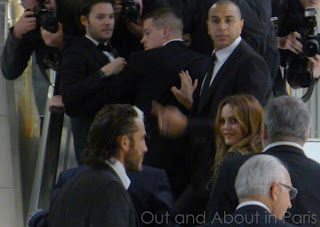 ...until they passed in front of me to admire the Chanel window displays. Swept inside with the flow of people,  I was able to get this parting shot of Vanessa when she graciously turned around and
smiled at the crowd as she rode the escalator to the cocktail party upstairs. All of the French
people around me kept saying, "Elle est si mignonne!" (She's so cute!). 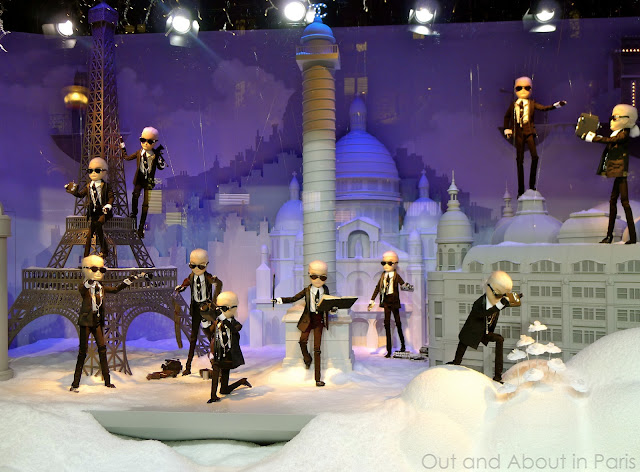 But even if I wouldn't have had the opportunity to see Karl Lagerfeld in person, one of the windows features Lagerfeld puppets scaling the Eiffel Tower, photographing flowers, and playfully
prancing in front of the Vendome Column.
As the Chanel-themed windows at Printemps are resplendent with Christmas wonders, I'll post more pictures on Saturday when we go window shopping together. In the meantime, here's a little something you may want to include in your letter to Santa!