Let the holiday season begin! But if it's too early for you to think about glitzy decorations, shiny storefront windows and Christmas, you can always save this post for another day.

Since I'm in Paris, I'm going to follow their schedule, although I have to admit that it's a relief that Galeries Lafayette refrained from playing "We Wish You a Merry Christmas" or "Deck the Halls" during the festivities last night. Not to sound like the Grinch, but there's a limit to how many times I can hear "Jingle Bells" during any given year. 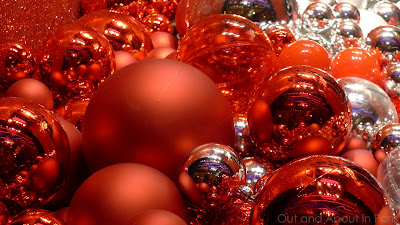 By the time that I arrived at Galeries Lafayette on Boulevard Hausmann yesterday evening, there was already a crowd of excited people waiting to watch British singer Charlie Winston illuminate the Christmas lights. As I was a bit early and didn't want to spend too much time standing in the drizzling rain, I went to the information booth inside the store, where the employees speak about six different languages, and asked about the time of Winston's performance. I momentarily thought about contacting Santa to ask if one of his flying reindeers could give me a lift to the rooftop terrace when they told me that the concert was reserved for members of the press but decided to save my Christmas wish for something more useful, like a new pair of boots or an Hermes scarf.